Submitted by The Gun Control Watchman
State of the Nation

Surely everyone has noticed the spate of highly choreographed, false flag, mass shootings — strategically staged in venues across America but especially located not too far from Washington D.C. and always carried out with assault rifles.  What better way is there to compel the U.S. Congress to pass legislation that outlaws all automatic and semi-automatic assault rifles?

Really, why did all of these melodramatic mass casualty events start to occur, in rapid succession, right after Election Day?!

Because this Khazarian-directed psyop has been meticulously orchestrated to serve as a ‘justification’ for the POTUS Imposter to issue an unconstitutional Executive Order banning all assault weapons, effectively immediately, before the new Congress convenes on January 3—THAT’S WHY ! ! ! 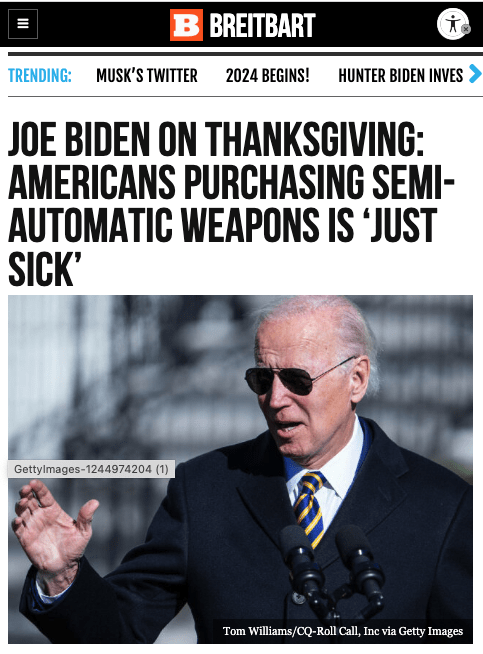 Biden knows that the incoming GOP-dominated House will be not be a friendly one.

Biden also knows that the Second Amendment must be cancelled if the New World Order agenda that he was criminally installed to implement is to be effectively advanced in all 50 states.

More importantly, Biden’s Khazarian masters know that the only way to completely collapse the American Republic is to remove all assault weapons from the citizenry, and especially from the previously discontented but now infuriated Patriot Movement.

Given that the Right just witnessed the Democrat Party “steal every election in sight” throughout both the 2020 and 2022 election cycles, they’re pissed.  And Team Biden knows it.

Which means that the Democrats in power will do what they always do: justify the unlawful execution of exceedingly brazen and desperate EOs to force their will upon We the People.

Therefore, expect Biden to hastily issue an illegal Executive Order banning all assault rifles effective January 1st.  Of course, he will wait until Congress is in recess before springing his patently illicit EO on the country … during the holidays while everyone is fat, dumb and happy stuffed with holiday food.

Also expect a rapid succession of “shock and awe” mass shootings across the country between now and then.

The Khazarians know that we’re on to them as never before.  In view of the exploding Covid ‘vaccine’ genocide, they also know there will be no mercy.

The Gun Control Watchman
State of the Nation
November 27, 2022