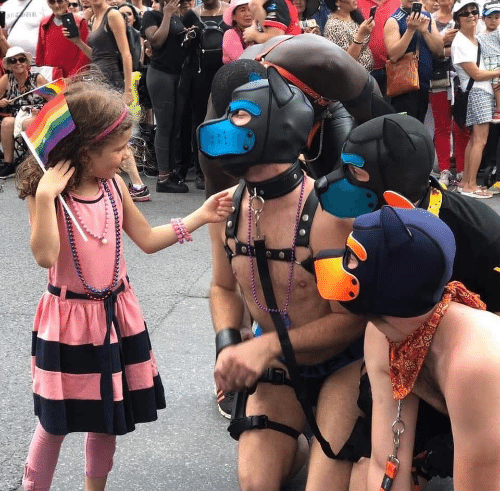 Joseph J. Fischel, a Jewish queer theorist at Yale, recently published a piece in Boston Review arguing that performing perverted homosexual acts in front of children is important because it teaches them to reject racism, sexism and homophobia.

Leading “LGBT” intellectuals are responding to public demands that they stop performing public sex acts in front of small children at “Pride” parades by doubling down.

Joseph J. Fischel, a Jewish queer theorist at Yale, recently published a piece in Boston Review arguing that performing perverted homosexual acts in front of children is important because it teaches them to reject racism, sexism and homophobia, as well introducing them to visual stimuli he hopes will arose them.

In the essay, he dismisses concerns that performing sex acts in front of children brought to “Pride” by their homosexual parents is wrong because they can’t “consent.” According to Fischel, this perspective is “racist” and “bad for children.” He refers to writings by transsexual blue check Julia Serrano, who states that people wearing wedding rings and publicly expressing right-wing political beliefs violate its consent, and so nobody has a right to demand that “kink” and public sodomy be banned from gay parades.

To build his argument from a legal standpoint, Fischel relies on Brenda Cossman, Stuart Green, Richard Posner and Joel Feinberg — all of them Jewish academic legal theorists — who argue that public sex acts in front of unsuspecting people are no more offensive than racist or “offensive” political speech, and that the distinction between private and public behavior is arbitrary, heteronormative, and should be done away with.

By shielding their children from displays of gay sex acts, parents are merely projecting their own puritanical impulses onto their children, argues Fischel:

When parents or people ventriloquizing parents oppose public indecency at Pride on the grounds that it may upset children, the opposite is more likely the case: their children might like it, and that upsets the parents, not the children. What is the presumptive harm if a child happens upon a guy sporting a chest harness, or sees an adult’s butt cheeks, or even an adult’s genitals or breasts? Would such children necessarily feel violated, or might adults be feeling violated on their behalf? Might the child be as likely to respond with curiosity?

According to the author, shocking children at any age by deliberately showing them grotesque sex acts functions to challenge their “heteronormative” default, as well as potentially make them “curious” and get them to “like it.”

Fischel expresses confusion over white liberals attending “pride” parades with their families because it is fashionable wanting to sanitize the deviant acts performed. He draws parallels to research conducted by recently deceased Jewish “gender studies” author Lauren Berlant on homosexual behavior, including an anecdote about a performance at a gay bar where a man force feeds a much younger man until he repeatedly vomits. According to Fischel, obscene displays of non-reproductive sex in public are radical acts that should be expected and encouraged at gay events.

Last September, National Justice wrote a piece warning that the Jewish community was preparing a push to normalize pedophilia. According to numerous gay and Jewish intellectuals, exposing young children to sex and engaging them in it is the pinnacle of anti-fascist activism and the ultimate blow to the “authoritarian” personality that Jews believe led to the populist movements that gave rise to figures like Hitler and Mussolini.

According to research conducted by Western Journal, multiple members of the San Francisco Gay Chorus behind the recent controversial video “We’re coming for your children” are convicted child molesters.

The mainstream media has responded to outrage over pedophiles singing songs about coming for people’s children by referring to critics as bigots and claiming to be victims of threats.

There does not appear to be a credible opponent to the “queer” power structure, which is backed by Wall Street and heavily infiltrated the government, media and academia. Both parties now celebrate homosexual and deviant behavior, even though racial minority blocs in the Democratic Party and the GOP’s rural white Christian base do not generally approve. Recently, the transsexual activist Caitlyn Jenner, who has launched a doomed bid to become Governor of California, was a headliner at the Conservative Political Action Conference (CPAC).

That high profile homosexuals no longer feel the need to hide their true aspirations reveals that normal people in America will be expected to pull the front line back yet again in the fight to resist extreme forms of sexual depravity.