DEFCON 1: And they haven’t even told US! 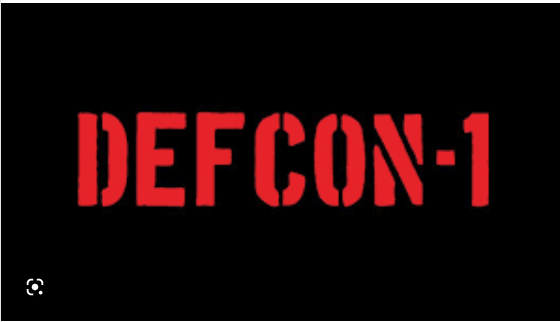 Make no mistake, the entire world community of nations
is now standing at the edge of the proverbial precipice.
And most countries, powerless as they are, find themselves
staring blankly into the apocalyptic abyss of World War 3.

First, it’s of paramount importance to understand that the Ukraine, United States, United Kingdom, Germany, Poland, Romania, Bulgaria, France, Italy, Spain, Finland, Norway, Sweden, Denmark and the Baltic Nations are all at war with the Russian Federation, to varying degrees of engagement, of course.

As for the ongoing NATO ruse, Ukraine didn’t even have to formally join NATO (aka the North Atlantic Terrorist Organization) because ever since the CIA-directed coup d’état was carried out as the Ukrainian Color Revolution in Kiev on February of 2014, the Armed Forces of Ukraine (AFU) have been secretly stationed under the NATO command structure.  Ukraine functions as a de facto member on NATO’s list of armed forces where it concerns fighting a war with Russia.

This means that every military move and battlefield maneuver by the AFU is dictated by NATO headquarters in Brussels after being jointly scripted by the Pentagon and British MoD.  Together with an army of Nazi mercenaries conscripted from all over the world, the AFU is battling Russia essentially as a military proxy force of the US and UK.  Which is why Zelensky’s Neo-Nazi regime is so willing to sacrifice every Ukrainian man, woman and child on the Khazarian altar of world dominion.  Both the United States and United Kingdom governments are notorious for being ZOGs.

In point of fact, the very day that Russia initiated its Special Military Operation in Ukraine on February 24, 2022, the Kremlin knew that they were launching a vital preemptive strike against the whole of NATO.  In fact, Russia was well aware (by continuous satellite analysis of ground movements) that Ukraine, with direct military assistance from NATO, had been surreptitiously planning a full-scale invasion of Donbas for March of 2022.

Now, here we are 10 months later and the Ukraine War battlefield just keeps getting bigger as the fighting keeps getting fiercer.  The battleground is actually expanding weekly to include Western Russia, Poland, Belarus and other contiguous territories.

Both sides of this epic war are fully aware that NATO, and particularly the US, UK, Germany and Israel, are all fully engaged in military operations in both Ukraine and Russia.  In other words, the hot phase of World War III has already begun in earnest.

KEY POINTS: For the uninitiated, agents of the Khazarian Cabal have been meticulously choreographing every single NATO attack on the Ukraine battlefield.  Likewise, the Khazarians have been orchestrating all of the MSM’s warmongering propaganda and Russophobic prevarication, much of it specifically designed to start the kinetic phase of World War III.  Given the rapidly intensifying hot war occurring throughout the regional theater of the Ukrainian armed conflict, the Khazarians are quite recklessly forcing Russia’s hand as they are Ukraine’s hand.  Hence, there can only be one outcome at this advanced stage of intensive military developments on both sides, especially in view of so many outright NATO provocations and threats aimed directly at Moscow. (Moscow is located only 450 kilometers or 280 miles from the Russian-Ukrainian border.) See: Ukrainian terrorists brazenly striking the greater Moscow metro area! (Photo) & BEWARE! Putin will respond to these attacks on their high-value aircraft that are part of Russia’s nuclear triad parked at an airbase close to Moscow.

Why do the Khazarians want war?  So they can steal everything that Russia possesses.

Why are they so determined to conquer the Russian Federation?  Because a unified Christian Russia stands as the greatest impediment to the globalist’s demonic New World Order agenda and the formation of a totalitarian One World Government.  Moreover, Moscow will never permit the long-planned Great Reset to proceed as long as Russian sovereignty is undermined in any way.

But why do the Khazarians so desperately need war … at this particular time?

There are two reasons primarily:

What follows are the main “Covid” reasons why, all of a sudden gone, things have gone to hell in a handbasket in Ukraine, as they will continue to:

•  The exceedingly dangerous and deadly Covid ‘vaccines’ are being exposed across the planet like never before as highly weaponized injections.

•  Details about the multiple variations of the COVID-19 bioweapon, as well as the top secret Quaternary Weapon System, are being disclosed in major venues around the globe.

• The official COVID-19 narrative is similarly being revealed as the greatest fraud and worldwide mass extermination scheme ever perpetrated against the human race.

Point of no return

Quite unfortunately for people everywhere, things are going to get MUCH WORSE before they ever get better.  This is the stark reality facing the world community of nations because the ever-treacherous Khazarian Cabal that effectively rules the world has deliberately pushed Russia beyond the point of no return.

“We’re rapidly reaching the point of no return.”

Let’s not forget that perhaps the major objective of Russia’s special military operation (SMO) was to destroy the 40 plus Pentagon-sponsored biolabs scattered across the Ukraine.  Team Putin possessed evidence that indicated bioweapons development, testing and procurement were being covertly conducted — with all deliberate speed — the target of which was ultimately Russia after deployment in Donbas.  Russia’s possession of hard proof confirming the existence of those unlawful bioweapon laboratories was all that the Kremlin ever needed to justify an invasion of Ukraine. See: Here’s the main reason why Russia has to completely neutralize Ukraine!

Perhaps even more urgency was given to the February SMO in view of the clandestine plan to strategically site nuclear weaponry throughout Ukraine.  Although the Kiev regime only mentioned nuclear weapon placement as a possibility, Zelensky had already green-lighted the foolhardy secret project.  All that remained was the covert transport of those weapons from Germany for final positioning in western Ukraine.  The Kremlin obviously would never tolerate such a calculated betrayal of all previous agreements made post-Soviet Union break-up.

Once the Russian Armed Forces were obliged to cross the Rubicon in Ukraine to protect the Russian speakers in Donbas, everything changed on planet Earth, and irreversibly so.  Furthermore, now that the highly organized international conspiracy to defraud Russia via the Minsk Agreements has been exposed by both former German Chancellor Angela Merkel and former Ukraine president Petro Poroshenko, there is absolutely no trust remaining between the Moscow and any Western capital.

You read that right: Two top national leaders shamelessly admitted that they intentionally negotiated the Minsk Agreement in bad faith so that Ukraine could build itself up militarily to invade Donbas and take back Crimea.  In the meantime, Kiev purposefully committed outright genocide against its own citizenry throughput the Donbass region.  Such an outright betrayal also permitted NATO to spend 8 years establishing a seamless command and control center as well as a military collaboration network with Ukraine by which to oversee and conduct the war after recklessly provoking Russia.

This type of despicable and scandalous conduct is exactly how the Khazarian Cabal coerced and compelled, bribed and blackmailed blocs of nations into the previous World Wars.  Because they can, at any time, use THE DARK TRIAD OF THE KHAZARIAN CABAL to manipulate kings and queens, presidents and prime minsters, chancellors and premiers, as well as other heads of state and national leaders, engineering a Third World War is very easy for them.

NEVER FORGET: Once the political, financial and economic power of the American hub of the Central Banking Cartel was unconstitutionally legislated the Federal Reserve Act of 1913, the DARK TRIAD was able to surreptitiously steal — UNOBSTRUCTED — an unlimited amount of money from the U.S. citizenry.  Then, and only then, using stolen US taxpayer monies, was the DARK TRIAD able to stealthily consolidate their power and steadily solidify their influence worldwide so as to exert total command and control over the entire planetary civilization.  In this way, the Khazarian mafia, Ashkenazi banksters and Zionist warmongers work together to terrorize populations and tyrannize nations the world over into fearfully executing their nefarious NWO agendas.

BOTTOM LINE: The Khazarian’s utterly satanic paradigm of rulership is very susceptible to being blown apart once and for all.  To wit, the extraordinary recklessness and brazen overreach of their COVID CON has totally exposed their preposterous NWO game plan.  Clearly they knew this would happen via the Internet; therefore, they must falsely believe that they can act with total impunity going forward.  For only a perfect marriage of profound arrogance and perpetual ignorance would give the Khazarian Cabal the collective fatal delusion that they could succeed in their flagrant world takeover attempt. 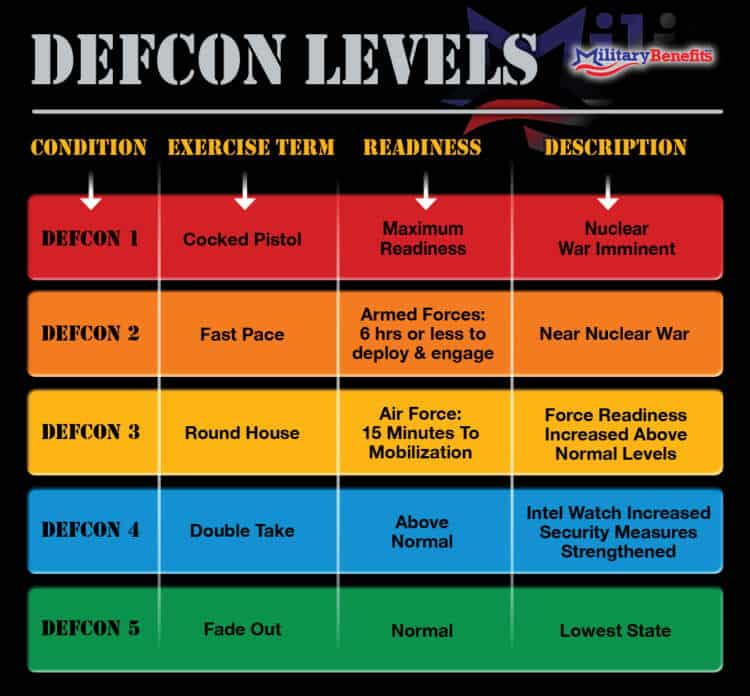 Although there is absolutely no indication whatsoever from officialdom, the U.S. Armed Forces have been assuming, continuously, a DEFCON 1 military posture since the very beginning of the Ukraine War.

The DEFCON system was developed by the Joint Chiefs of Staff (JCS) and unified and specified combatant commands.[2] It prescribes five graduated levels of readiness (or states of alert) for the U.S. military. It increases in severity from DEFCON 5 (least severe) to DEFCON 1 (most severe) to match varying military situations, with DEFCON 1 signalling the outbreak of nuclear warfare.[1][1]

The ever-deceitful Biden administration would never reveal such a radioactive reality however, because it knows the American people would not accept being put in harm’s way for the sake of fighting such a senseless and horrific war which only drains the U.S. Treasury and puts a target on their backs.

Nevertheless, the United States of America will soon have to acknowledge that the nation’s military readiness is now operating at full-scale DEFCON 1 status, which specifically means that “nuclear war is imminent or has already begun” (see DEFCON level chart above).

The Khazarian Cabal has quite deftly set up the global geopolitical chessboard so that nuclear war now hangs over the head of every nation on Earth as a modern-day sword of Damocles.  In this fashion, the Khazarians are better able to extract any agreement from any country they so desire.

This perfidious stratagem, together with their ubiquitous Samson Option, allows them forcefully facilitate the implementation of their Great Reset.  Countries around the world are already being coerced into rolling out CBDC against their will.  For the integral piece of the New World Order puzzle, which must be expeditiously put into its proper place, is the CBDC control and monitoring mechanism. See: CBDC TYRANNY UNFOLDING IN REAL TIME AROUND THE GLOBE

Lastly, we repeat, the entire U.S. Military is
currently operating at DEFCON 1, and the
American people have not even been told.

SOTN Editor’s Note: Many folks will question how the United States Armed Forces could be functioning at DEFCON 1 when all the impacted military bases have not conspicuously activated at that level.  That’s easy: there are two distinct levels within DEFCON 1.  One is top-secret and highly classified and only activated at the level of command leadership; the other level can be activated on a moment’s notice when it’s time to react to an actual nuclear attack or raise up defenses to prevent any such attack on U.S. soil.

Perhaps when Kanye West blurted out “DEFCON 3” back in October, it was the “Universe” using him to tell US that the world was fast approaching the cusp of nuclear Armageddon.