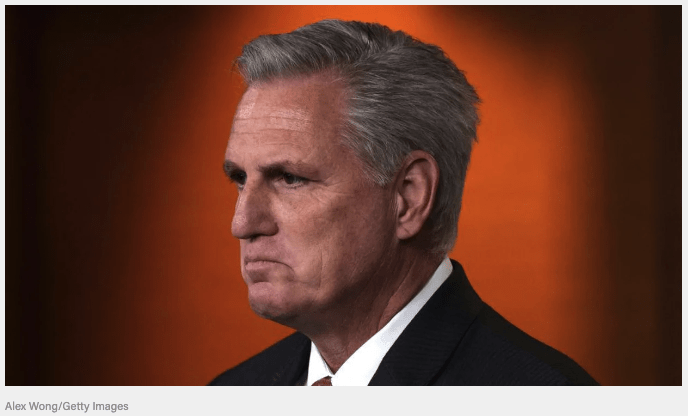 Most of the top incoming House committee chairmen reflect the values of Democrat voters more than Republican voters. That is the legacy of Kevin McCarthy-era leadership. It’s time for that to change, and it’s time to end the “next in line” country club politics of the GOP.

Mouthpieces for the failed GOP leadership are complaining that the fight for speaker is delaying potentially for a few days the amazing committee work they have planned. But with committee chairs like the ones lined up at present, it sure is worth spending a few days doing surgery on the gangrene globalists within the party rather than spending the next two years with chairmen who hate their base more than Biden does. It’s worth the time to ensure that we don’t wind up with the same chairmen we dealt with during the last GOP majority, when McCarthy was floor leader.

When Democrats select committee chairs, they choose members who not only fought in the trenches for every leftist cause, but who are particularly intrepid in advancing their agenda on the relevant subject matter under the jurisdiction of said committee. Picture Rosa DeLauro, Adam Smith, Maxine Waters, Jerry Nadler, and Adam Schiff. There was not a single Democrat chair who was moderate on a single issue. These people made most of the chairmen during Pelosi’s first tenure as speaker in 2007 seem like Barry Goldwater.

Republicans, on the other hand, choose people who thwart their conservative base on most issues, particularly those issues over which they will take charge as committee chairs. Let us take a tour of the new GOP House majority and examine the amazing fighters they have slated for committee chairs.

The Energy and Commerce Committee is considered one of the most powerful committees in economic and domestic policy. One would expect the rising chairman to be the most articulate foe of the global warming and green energy agenda. Instead, Cathy McMorris Rodgers, who has a 60% Liberty Score, is the quintessential fusionist who likes to validate the global warming agenda and the need for green energy while merely opposing the most extreme measures of transitioning too quickly.

“I’m still learning,” McMorris Rodgers recently told a climate fascist activist who asked about her position on global warming. “I think (any regulation) needs to be smart. I think it’s important to recognize we brought down carbon emissions.”

Applying Newton’s laws of motion to politics, this is not exactly the sort of equal and opposing force that is going to stop the green energy agenda, which is the biggest threat to our life, liberty, and property. This is not exactly someone who will end all green energy subsidies and global warming mandates. In her opening remarks at a subcommittee hearing last year, she perfectly summarized the limp GOP “agree to the premise” strategy that has helped destroy workable energy in this country for years. “We need a smart approach — rooted in reality — to secure a cleaner energy future,” she said. Just like with COVID, McMorris Rodgers believes we need to achieve the leftist agenda from the leftist premise, just more thoughtfully and efficiently. This is a core value of the Republican Governance Group (the RINO equivalent of the Freedom Caucus), of which she is a member.

What about Appropriations? This is the committee that writes the budget, which is even more important than legislation. That is run by original never-Trumper Kay Granger, with a Liberty Score of 51%. She is one of the biggest spenders in Congress. The 12 appropriations subcommittee chairs, known as “cardinals,” are also run by big-government Republicans who love Pfizer, Ukraine, and the FBI more than our border.

The other major A-level House committee is Ways and Means, which is responsible for all tax and revenue bills. The front-runner for that job so far is Vern Buchanan with a 57% Liberty Score.

What about Foreign Affairs? Michael McCaul, another Republican Governance Group member, is slated to take over, after his disastrous tenure as Homeland Security Committee chair the last time Republicans were in the majority. That is when they couldn’t get the border taken care of – even with trifecta control – and the few good things implemented were done administratively by Trump.

Armed Services will be run by Mike Rogers, who holds a 61% Liberty Score in one of the most conservative districts in the country. The core reason we get crushed on every government funding bill is because people like Rogers believe in unlimited funding thrown at the woke and broken military without any policy changes in return. He didn’t utter a word on the vaccine mandates in the military until months after it was too late. Now he is advocating that those who rebel against McCarthy should get kicked off committees.

Finally, there is the Rules Committee. In many respects, the Rules Committee is the committee of committees, because it determines which bills are voted out to the floor and under what rules and circumstances. The Rules Committee chairman is therefore the most powerful party leader after the speaker and majority leader. The incoming chairman, as I’ve already noted, is Rep. Tom Cole, who has a 50% Liberty Score. There’s almost not a single issue of importance on which he doesn’t agree with the Democrat premise, including the need for even more funding of Jan. 6 FBI persecutions.

Ever wonder why the House breaks all its rules and votes on bills less than 72 hours after reading them and doesn’t allow amendment votes? The Rules Committee can just waive the standing rules for that particular bill, which is usually for the most important pieces of legislation.

Thus, the House is broken and the GOP is broken. Keeping the same power players from the past failed GOP majorities is the definition of insanity. Demanding that people stand down for a few days of debate just to get the show on the road will ensure that this GOP majority is indeed just a show. It’s time we move beyond the “lesser of two evils” and the defeatist low expectations of “at least it’s Tom Cole and not a Democrat.”

If people really want change, at a minimum, they’d allow Freedom Caucus members – who represent the heart and soul of the majority of actual GOP voters – to run the Rules Committee so that our voices can be heard. Bills like repealing vaccine liability immunity will never receive a floor debate under the current structure because the McCarthy Republicans want to evince a conservative image without having to take Overton window-shifting votes.

It’s funny how today it’s almost consensus among conservative chatterboxes that Boehner was bad for conservatives and that McConnell is a subversive menace. But throughout the past decade when it actually mattered, many of these same voices called us the same names they are calling us today in defense of Kevin McCarthy. Do we really need to wait another two to four years to be proven right after the damage is already done, or will we finally take a few days to debate the purpose of this GOP majority and what most old-bull Republicans actually believe?

The same Republican voices who have come out of hiding and are slowly waking up to the lie of Ukraine after the policies caused immutable harm will come around on Kevin McCarthy one day – after it no longer matters and we are on to the next issue. As Mark Twain once said, “In the beginning of a change, the patriot is a scarce man, and brave, and hated and scorned. When his cause succeeds, the timid join him, for then it costs nothing to be a patriot.”