HOW DOES CHIEF JUSTICE JOHN ROBERTS DEAL WITH HIS WIFE’S COLLUSION WITH THE PILGRIMS SOCIETY?! 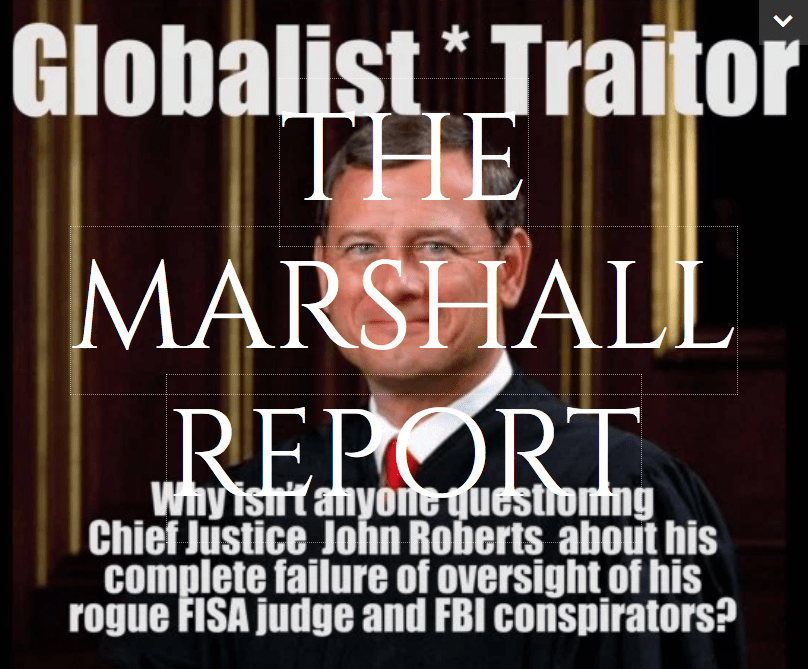 SCOTUS John Roberts wife, Jane Sullivan Roberts consults for many of the Leading “Pilgrims Society Companies” throughout the world in Satellite Technology, Law and Big Pharma. And just what is the Pilgrims Society? In short, it is the collective of the Great Merchants of the Earth, World Bankers and Royal Crowns who aspire to have one global world that they rule.

John Roberts was confirmed by the Senate to the Supreme Court on September 29, 2005 during the George W. Bush Administration. He is a conservative but now with recent information the question is being raised of where his loyalties lie… to the United States of America or Global One World Order?

The truth is Robert’s wife’s conflicts of interest disqualify Roberts from most cases he’s ever been involved in. He has never recused himself.

Recently, Lin Wood has shouted out on social media that Roberts has to come clean with the American public. A recent tweet stated, ” The People have a list of questions for C.J. Roberts based on bizarre votes on major cases starting with Obamacare. But let’s ask him just two: 1. Are you the John Roberts on Epstein flight logs? 2. Did you say about @realDonaldTrump “the mother f#*ker would never be re-elected.”

So it didn’t take much searching to find that Robert’s wife, Jane Sullivan Roberts oversees the recruiting of Pilgrims Society soldiers globally. She was consulting to EVERY participant in the Leader v. Facebook whitewash (this is the lawsuit of McGibbens, owner of Leader Technology whose patent was stolen by the CIA and they used it to create Facebook and all other social media. He is still sueing for his intellectual property and hopes that Trump will sign a check regarding the Miller Act which would return lost royalties on High Tech using his property that was stolen… and Obamacare… Read more here: JOHN ROBERTS DESTROYS AMERICAN COURT SYSTEM FOR THE QUEEN – I am a doctor (lena-mozya.ru)

ROBERTS NEEDS TO COME CLEAN ON HIS WIFE’S COLLUSION WITH THE PILGRIMS SOCIETY and his conflicts of interest that interfere with him putting the constitutional law of the land first and his special interests out of the court room.

Wood accused Roberts of having ties to pedophile billionaire .

Lin Wood also put out a tweet stating that this “may be the most important tweet of my life.”

Read more on Roberts here: JOHN ROBERTS DESTROYS AMERICAN COURT SYSTEM FOR THE QUEEN – I am a doctor (lena-mozya.ru)

The house cleaning has begun, but no one knew just how dirty things were in The highest Court in the land…the Supreme Court has been very grungy to say the least. The question is – what if anything shall be done about it? Is there enough evidence to justify treason? It is starting to look like a very strong case.

Pray for those exposing the evil that they are protected and no harm touch them. It’s not easy going against the swamp. The stuff crawling in there is not fit for eyes to see.

With all the craziness taking place and knowing that after the fiasco with Roberts where he yelled at the other justices and told them they will vote as he says…it was reported that Kavanaugh was smiling with Roberts as they left the room. Is it possible that the Kavanaugh court fiasco was all staged to give the appearance of injustice on the poor guy and his family for public sympathy and he was a Pilgrim pick all along? Could it be? Naw….why go to all that trouble? For what?

Brett Kavanaugh Is a Pilgrims Society Operative out to Destroy America and the Constitution. Neil Gorsuch, too. – American Intelligence Media (aim4truth.org) This can explain the one time Lyndsey Graham had a sack!

Question all things for something sure doesn’t smell right. The swamp reeks to high heaven!