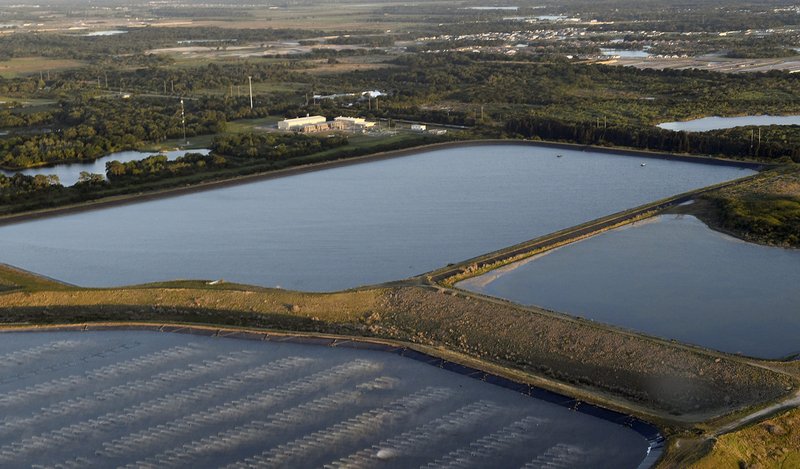 This photo shows a reservoir near the old Piney Point phosphate mine, Saturday, April 3, 2021, north of Bradenton. Gov. Ron DeSantis declared a state of emergency Saturday after a significant leak at a large pond of wastewater threatened to flood roads and burst a system that stores polluted waters. The pond where the leak was discovered is at the old Piney Point phosphate mine, sitting in a stack of phosphogypsum, a waste product from manufacturing fertilizer that is radioactive. (Tiffany Tompkins/The Bradenton Herald via AP)

What very few are aware of is that there are ticking time bombs deliberately engineered all over the USA, each waiting to be exploded at an opportune time by enemies of the American Republic.

These “ticking time bombs” take the form of environmental catastrophes and ecological disasters, building and bridge collapses, gas explosions and fire conflagrations, as well as an array of other purposefully engineered calamities.

All of these events, such as the calamitous BP Gulf Oil Spill, are perpetrated and orchestrated and dramatized to have maximum impact as a distraction and/or an attack on a nation, state or city. See: BP Gulf Oil Spill: Obama Staged His Own 9/11 That Nobody Suspected

In many cases, these carefully preplanned black operations are aimed directly at a federal or state administration as well as an individual politician who the New World Order globalist cabal wishes to take down.

Such is the case with the rapidly unfolding drama being meticulously choreographed in Manatee County, Florida.

Governor Ron DeSantis has declared a state emergency to manage the ‘Imminent’ Collapse at the Florida Phosphate Plant Wastewater Pond that Threatens Tampa Bay, Surrounding Neighborhoods, so the headline reads.

The Piney Point radioactive wastewater reservoir was apparently chosen because of the great impact such an environmental catastrophe will have on the greater Bradenton area and especially on Tampa Bay.

What better way to criticize an environmentally aware governor than to execute such a devastating reservoir collapse… which will somehow be blamed on him, as will the MSM-labelled ‘botched emergency plan’.

Let’s be clear: HUGE accidents like this don’t just happen, they’re made to happen through a combination of many manmade actions and inactions.  Of course, The Powers That Be, that are always behind these highly distracting events, control the whole disaster site from afar as well as the narrative falsely reported by the CIA’s Mockingbird Media.

In other words, there’s no reason why this reservoir, in light of the radioactive content, should not have been serviced by all the upkeep and maintenance necessary to ensure complete structural integrity.

In the case of Piney Point, there is also the great likelihood that intentional sabotage was committed to hasten the collapse ON EASTER SUNDAY!

Governor DeSantis is well known to be a devout Christian and it’s quite likely the perps specifically timed this cataclysm to blow up on the most holy Easter weekend as it has.

KEY POINT: The world recently experienced another NWO black operation and global psyop with the execution of OPERATION SUEZ SHUTDOWN.  That transparently staged op unravelled so quickly the perps were forced to abandon the engineered closure for fear of being exposed as never before. See: OPERATION SUEZ SHUTDOWN: A Global Psyop With Multiple Nefarious NWO Ambitions

Really, this extraordinary environmental catastrophe just happens to climax on Easter Sunday?!?!   Only by intentional design, of course.

The very fact that the always politically opportunistic Agriculture Commissioner Nikki Fried is screaming for the Governor to convene a special cabinet meeting to deal with Piney Point says it all.

Not only is Fried running for Florida Governor in 2022, she never misses a chance to disrespectfully demean or unjustly criticize DeSantis for anything and everything he does in Tallahassee.

The more Fried attempts to exploit this emergency situation, the more her puppet strings are being pulled by her globalist masters.  After all, she’s known as George Soros’s girl in the Sunshine State willing to do his NWO bidding anytime, anywhere.

Bottom Line: The Democrat Party will do everything in its power to unseat Governor DeSantis between now and Election Day.  As the whole world witnessed during the 2000 POTUS election cycle, the Democrats colluding with Deep State and the NWO cabal will commit any crime and/or engage any corruption necessary to tarnish his administration or rig/steal the upcoming election.  The Piney Point debacle is just the beginning of their nefarious schemes to defeat him anyway they can, no matter how vile and destructive their criminal conspiracies.