There’s a WARMONGER-IN-CHIEF in the Oval Office & Nobody Seems To Care! 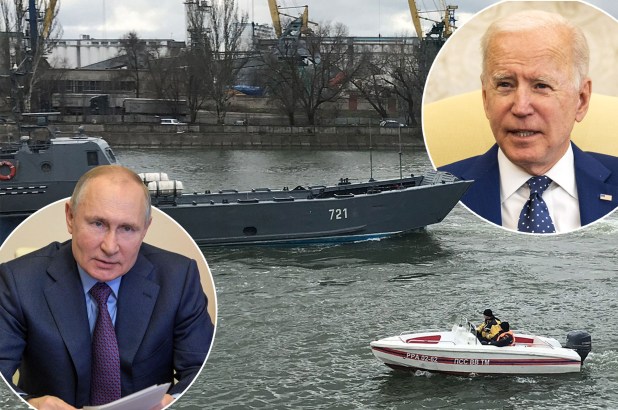 Russian President Vladimir Putin took advantage of the Biden administration’s decision to abandon plans to send two destroyers to the Black Sea by closing off the Kerch Strait, connecting Crimea to Russia, to foreign warships until next fall.

The action comes as Russia warned the US on Tuesday to stay away from the area “for their own good” after the Biden administration said it was going to send two destroyers — the USS Roosevelt and the USS Donald Cook — to the Black Sea in response to Moscow’s increasing military presence near Ukraine.

Putin will close the Kerch Strait beginning next week until October, blocking foreign warships that are conducting military exercises, including the US, the Ukraine foreign ministry said Thursday.

The US and its allies slapped sanctions on Putin for illegally annexing Crimea in 2014.

The Biden administration pulled back the two destroyers from steaming into the Black Sea after fighting intensified between Ukrainian and Russian-backed separatist forces in an effort to de-escalate the situation, Politico reported.

“We have no desire to be in an escalating war with Russia,” the Daily Mail quoted a senior administration official as saying, who added that the White House doesn’t want things “spinning out of control.”

“We do not seek a downward spiral. We can and think we can avoid that,” the official said.