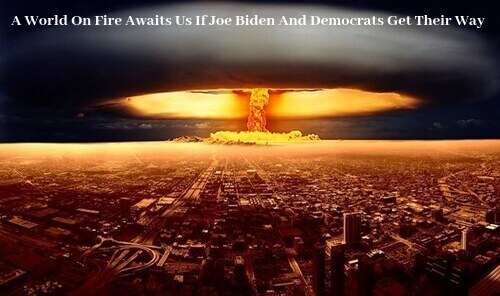 In the latest sign of big war troubles ahead, the Daily Mail reports in this Wednesday story that Russia is participating in ‘live fire drills’ in the Black Sea, with Kremlin insiders now warning ‘war is inevitable’ over rising political tensions in the Ukraine that threaten to bring what the top voted comment on that story warned: “All the peace enjoyed under Trump is about to be undone”.

With the globalists long pushing for war with Russia dating back to Barack Obama and with Hillary Clinton herself stoking major tensions with Russia in the run-up to the 2016 election, it’s concerning that these drills are happening at the same time as two US warships arriving in the Black Sea, the entrance of the USS Donald Cook and USS Roosevelt into that region.

(ANP UPDATE! Biden has canceled the deployment of those two warships into the Black Sea!! Was it because of what happened back in 2014 as we explore below?)

And with that entrance that was supposed to be made by US warships despite Russian warnings for them to keep away ‘for their own good’ hinting to us that ‘zero hour is approaching’ as this new story over at War News 24/7 warns, we have to take a flashback look at this 2014 story over at Voltaire that Steve Quayle had linked to on his website way back then to see what may be ahead.

With that 2014 story titled “What spooked the USS Donald Cook so much in the Black Sea?” hinting of one of the potential disasters that awaits America should war break out with Russia, as that story reported, Russia was able to shut down and completely disable the USS Donald Cook, one of America’s ‘most fearsome’ warships, without using any ‘traditional’ weapons at all, only an electronic warfare ‘jamming device’.

Completely disabling all radars, control circuits, systems, information transmission, etc. on board that US destroyer, as Russian state news reported three years after that ‘attack’, Russia claims their ‘khibiny electronic warfare jamming system’ could completely cripple the entire US Navy.

So with the region of Eastern Ukraine now ‘on fire’ again with Joe Biden and the globalists in the White House, as this War News 24/7 piece warns, with NATO monitoring the situation with great concern while the wider Black Sea region is very close to a Russia-Ukraine war that could drag in not only Europe and NATO but the US as well, ‘incalculable consequences’ await us all. 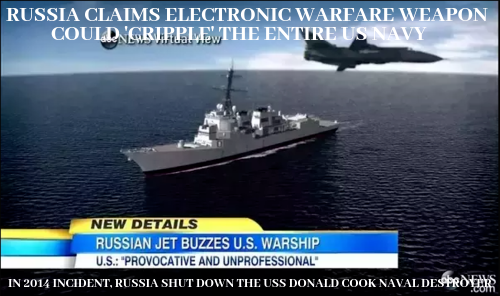 The excerpt below comes to us from this 2017 story over at the Independent which reported on that Russian ‘attack’ upon the USS Donald Cook before we continue.

Russia-1’s Vesti programme said an electronic warfare device called “Khibiny” was used by a Russian pilot to completely deactivate the defense systems of the USS Donald Cook in a 2014 encounter in the Black Sea.

The US’ Aegis system, manufactured by Lockheed Martin, is designed to protect a fleet against attacks by aircraft, and cruise and ballistic missiles.

But the state-controlled Vesti broadcast claimed the pilot of a Sukhoi Su-24 jet was able to deactivate “the whole ship’s systems” with “powerful radio-electronic waves” during the fly-by incident three years ago, around the time of Russia’s annexation of Crimea.

So while Joe Biden, Democrats and ‘the left’ are pushing for a war against one of the world’s other ‘super powers’, any such war could bring America absolute disaster in a worst case scenario.

And with this 2017 story over at Sputnik News reporting that Russia’s ‘electro-magnetic weapons’ could be ‘more efficient than nuclear weapons’, Russia already demonstrating that they could completely shut down the defenses of one of our most modern warships hints Biden and America would be much better off avoiding another war in our futures, especially if Russia decides to use such ‘weapons’ upon America as a whole.

(ANP NEEDS YOUR HELP: Donations and ad revenue are all that keep ANP online, so please consider donating to ANP to help keep us in this fight for America’s future at this critical time in US history. With ‘slow-Joe’ Biden occupying the White House, and at a time of systematic, ‘big tech’ censorship and widespread Democrat corruption, truthful media and alternative views are crucial.)

As Dr. Peter Vincent Pry, the Executive Director of Task Force on National and Homeland Security, a Congressional Advisory Board dedicated to achieving protection of the United States from electromagnetic pulse (EMP), has long warned, should an EMP attack be launched upon America,  (which according to Senator Ron Johnson (R-Wis.) is a “100% certainty will happen at some time in the future”), as many as 9 out of 10 people in the U.S. could die.

With a widespread EMP attack taking down not only the electrical grid but everything attached to that grid that makes us a ‘modern society’, imagine having a power outage that lasts for an undetermined length of time. With any power outage due to weather or other ‘acts of God’ always bringing us some kind of ‘pain and disruption’ of our daily lives, just imagine what would happen to our entire society should the electrical grid go down for an extended period of time, such as a year or two, following ‘an EMP event’!

So while some might argue that since we were able to live as human beings for thousands of years without electricity, such ‘an event’ wouldn’t be catastrophic at all, as this 2017 story over at the Urban Survival Site warned, human beings BEFORE electricity were prepared to live their lives without it, since they didn’t have it anyways, but we in this modern day and age we’re living in are totally different. From that story before our conclusion.

While it may seem as if going without electricity would be nothing but an unfortunate inconvenience, the truth is much more harrowing. To better understand why 90% of the population would die if the lights went out, consider the following ways in which losing electricity would impact our society.

No Electricity Means No Water

Almost no one in the United States still carries a bucket to a well to draw up water. What this means, though, is that our water sources are now dependent on electricity. If an EMP strikes, the vast majority of the population would lose access to fresh water as soon as the water towers run dry.

Some people would be able to find other sources, but many would not. For those without water, the length of their lifespan would be measured in days.

No Electricity Means No Food

Those who are able to find water sources not dependent on electrical power now have another concern: food. Almost everyone who lives in an urban location is completely dependent on markets and grocery stores for their food supply. Even those who live in rural locations are largely, if not completely, dependent on buying food from outside sources.

However, if the electricity goes out, the supermarkets are going to be looted and possibly never restocked. From transportation to refrigeration, to even the growing of the food itself, our entire system of keeping the population fed is reliant on electricity.

With no electricity also meaning no modern medicine, no public transportation systems, no way for Americans to ‘control the climate’ within our own homes, no ‘modern amenities’ of any kind and a HUGE increase in crime as people realize they won’t be able to just go to the store to buy food and other necessities, an America without electricity for more than just a few days could bring total disaster.

And with no electricity also bringing the problem of no modern sanitation, diseases would spread at an exponential rate, leading to no electricity meaning far more sick people and fewer ways to treat them.

So with any war in 2021 against Russia, China or any other well armed nation for that matter likely bringing utter catastrophe to America, as we’re warned in the only video below from Infowars, Americans should pray for peace and be fully prepared for the days ahead, fully knowing we may be only one ‘military incident’ away from a nuclear apocalypse or ‘electronic armageddon‘.

___
https://allnewspipeline.com/Zero_Hour_Is_Closing_In_Incalculable_Consequences
_Await_Us.php
This entry was posted in Uncategorized. Bookmark the permalink.