Was the deadly stampede in Israel deliberately triggered to cause maximum death and injury?

Human Tragedies Like This in Israel Are No Accident, They’re Made to Happen on Purpose

SOTN Editor’s Note: Israel is in shock today because the Covid control freaks in Tel Aviv put the whole country in shock.  Netanyahu’s government does not want anyone, especially religious groups, congregating in such large groups as they did at the HUGE Lag B’Omer religious festival yesterday.  Such behavior sends the ‘wrong message’ to the rest of Israel that the pandemic is over and should no longer be feared.

These massive jamborees have taken place practically forever in Israel so they know how to properly prepare and prevent disasters like this.  Hence, this catastrophe was certainly “made to happen on purpose” to have maximum dramatic effect as it is now having nationwide.  After all, Israel has been painstakingly set up to be the national poster child for COVID-1984—an entire society perfectly controlled by the genocidal maniacs in Tel Aviv who issued the Covid vaccine mandates.

The Mossad has triggered numerous stampedes in Saudi Arabia over the years, especially during the Hajj in Mina just east of Mecca.  A close examination of the historical record clearly indicates that each of those deadly stampedes was intentionally provoked at critical times during the never-ending Mideast geopolitical chess game. See: Saudi Arabia Colluded With MOSSAD: Triggered Hajj Stampede To Kidnap Iranian Officials And Revolutionary Guards

N.B. See the article below for the details.  And be sure to watch the videos of the jamboree to see just how massive the crowds are.

At least 44 killed, 150+ injured in STAMPEDE at crowded bonfire festival in Israel 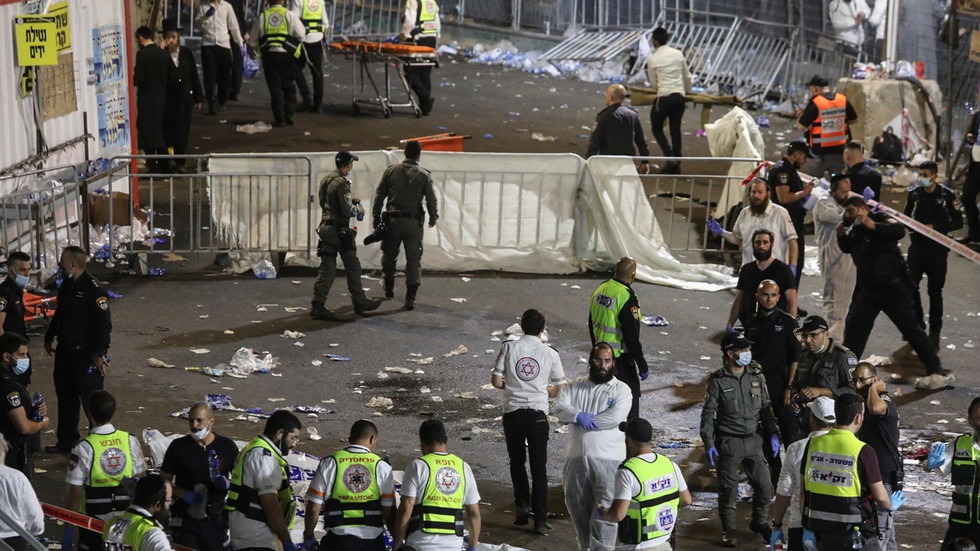 Over 150 people have been injured, some critically, and at least 44 have died in a stampede at the crowded Lag B’Omer bonfire festival in northern Israel, local media reported, citing emergency services.

Emergency response teams said six of the injured are in critical condition and 18 are in serious condition after the incident at Mount Meron.

“It happened in a split second; people just fell, trampling each other. It was a disaster,” one witness told Haaretz

Police sources cited by the newspaper said the stampede was triggered after attendees slipped on a staircase, causing dozens of others to fall.

Tens of thousands of Hassidic Jews had gathered at Mount Meron for the annual festivities at the tomb of Rabbi Shimon Bar Yochai, the largest event in Israel since the start of the Covid-19 pandemic. On Thursday night, organizers estimated some 100,000 people were in attendance, expecting another 100,000 to arrive by Friday morning.

Footage from the festival has circulated online, showing a massive crowd of revelers dancing to live music prior to the stampede.

Israeli health officials had urged residents not to travel to Mount Meron, citing fears the gathering could contribute to the spread of Covid-19. Some 5,000 police officers were deployed to monitor the event.

The crowding has reportedly created obstacles for rescue crews, which used helicopters to evacuate the wounded. The Israeli Defense Forces also said it deployed a unit and multiple aircraft to the scene.

While the IDF and a number of early reports suggested the stampede was caused after a roof or stage collapsed, Israel’s emergency service later clarified that the deaths and injuries were the result of overcrowding alone.

The emergency agency released footage from the scene, showing the rescue effort in progress, while Prime Minister Benjamin Netanyahu called the incident a “terrible disaster.”