HERE IT COMES! The Beginning of the Bankster’s Super Shemitah

It doesn’t get any bigger than

Analysis by SOTN Financial Analyst
State of the Nation

Just as the great stock market crash of 2008 occurred right after the real estate market crash of 2007, it appears that the Zio-Anglo-America banksters are set to execute another fastidiously controlled demolition of the entire Global Economic & Financial System (GE&FS) beginning this September.

What drove the series of stock crashes during September and right through October of 2008 was the unparalleled housing market collapse which began in early 2007 and continued through 2008. See: FLASHBACK: U.S. Housing Market Crash of 2007 Foreshadows Stock Market Collapse of 2008

Of course, the highly manipulated trigger for that epic stock market crash was the controlled demolition of Lehman Brothers on Monday, September 15th 2008— the largest bankruptcy in U.S. history.

Well, fast forward to 2021 and we are seeing a very curious replay of events.

Only this time the real estate bust is beginning in China with the current free-fall collapse of the Evergrande Real Estate Group.

Also known as The Evergrande Group, this meteoric collapse has proved to be as “grande” as they come; so grand that it will likely be used as both the cause and the trigger for the coming long-planned controlled demolition of the GE&FS.

While the Evergrande default presents only half the debt load of what Lehman Brothers defaulted on in 2008, the interpenetration of the financial impacts throughout the Chinese real estate markets is exposing HUGE fault lines.

What that means is that the entire Chinese real estate market, which is really a house of cards built on quicksand, is liable to collapse faster than you can say W U H A N.

Really, why is China being used again by the New World Order globalist cabal to implement their Ordo ab Chao strategy toward a One World Government?

Who has not either witnessed or experienced the utter
chaos, confusion and conflict caused by OPERATION COVID-19
that was quite purposefully launched in Wuhan, China
during January of 2020? But, why China?!

Now it appears that the perpetrators of that all-out Covid Biowar against humanity are backed in a corner of their own doing.

Their plans to foist a COVID-19 tyranny on the world community of nations is falling apart faster than a roadrunner on a hot Texas highway.  So, too, is the catastrophic implementation of their Covid Super Vaccination Agenda doing a real-time crash and burn.

Given these side-by-side NWO global disasters, the perps of which are being caught IN BROAD DAYLIGHT, the cabal seems to have only one alternative remaining.

That alternative is to significantly move up the date of their long-scheduled controlled demolition of the GE&FS that was originally planned for September of 2022.

In this new context, the preplanned collapse of EVERGRANDE will serve as both the trigger for the coming global real estate breakdown (which had already began in earnest with the unprecedented Covid commercial real estate collapse throughout the West), as well as the necessary and HIGHLY DRAMATIC “Lehman Moment” that will justify the stock market crashes soon to be engineered worldwide.

Just take a look at the following headlines from the largest financial/economic media platforms in the USA to grasp the sheer enormity and profundity of the ongoing implosion of Evergrande.

It is quite possible that the Central Banking Cartel and International Banking Crime Syndicate will string out the demolition process until 2022, as they always plan these monumental “boom and bust’ according to a specific schedule of pivotal events (known as the Shemitah), each event triggering the next to produce a meticulously engineered domino effect.  See the following exposé.

Regardless of how the NWO globalists carry out this crucial piece of their desperate agenda to take over the entire planetary civilization via the GREAT RESET, they have in fact passed the point of no return.

THE GREAT SCAMDEMIC has proved to be their undoing.  So many people have awakened across the planet to their utterly absurd and insane scheme to chip every person alive via the Covid jabs (aka the MOTB) that the resulting calamitous and pervasive devastation cannot be undone.

In short, the Covid criminals and Clotshot perpetrators have been caught red-handed with absolutely no where to escape to.  Hence, there is a great likelihood that the cabal banksters will quickly move forward with “The Controlled Demolition of Everything” in 2021. 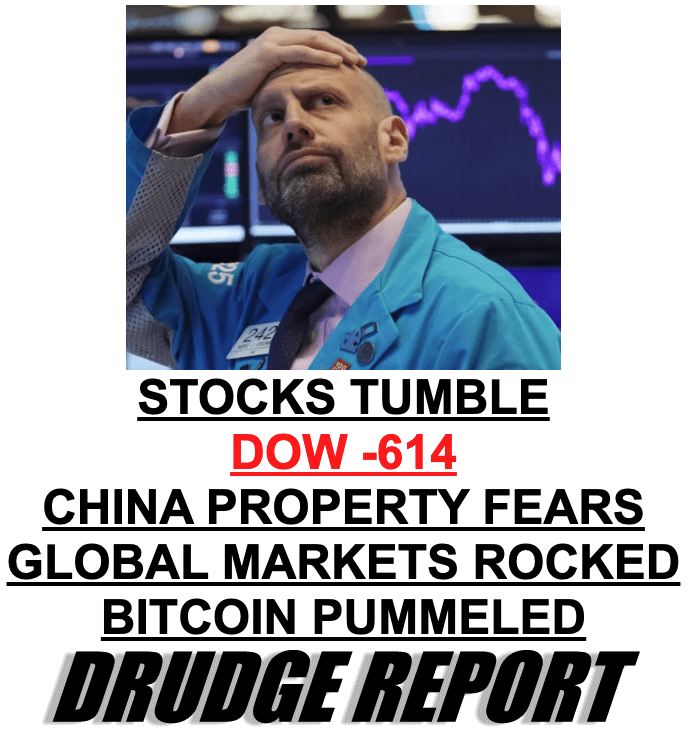 Here’s what happened on Monday, September 20th, in reaction to the implosion of Evergrande

One final point: No matter what the NWO cabal does, or when they do it, the next 12 months will prove to be the most consequential in human history.  Therefore, prepare and plan for any eventuality … but don’t get stressed about the unstoppable changes since they all happening according a truly “Divine Plan“.

What, pray tell is the “Bankster’s Super Shemitah”?!

Read this:  NWO GLOBALISTS AND BANKSTERS ARE
ACCELERATING THE GREAT RESET TO ALIGN WITH
THE SUPER SHEMITAH of 2022/2023