Check out the details for the coming TOTAL LUNAR ECLIPSE on Election Day 2022.

Beaver Blood Moon lunar eclipse 2022: Everything you need to know

A reddish moon will be visible on Nov. 8 for 85 minutes from North America, parts of South America, Asia, Australia and New Zealand The second total lunar eclipse of 2022 will turn the moon a reddish-copper color for 85 minutes on Nov. 8, 2022, though what you’ll see during this safe naked-eye event will depend on your location on the planet.

Often colloquially called a Blood Moon, a total lunar eclipse, happens as the full moon (in this case November’s full Beaver Moon) moves into the deep umbral shadow of the Earth and receives only light first filtered by Earth’s atmosphere, will be visible from North America and parts of South America, Asia, Australia and New Zealand.

This is a global event happening at the same time for all observers, but local time will depend on your location, which you can find out on TimeandDate.com(opens in new tab).

Throughout the entire event, it will also be possible to see the seventh planet Uranus close to the eclipsed moon(opens in new tab). In parts of Asia — including Hong Kong(opens in new tab) — Uranus will be briefly hidden behind the moon during totality.

This will be the second and final lunar eclipse in 2022. The last one took place on May 16, 2022. There will also be two lunar eclipses in 2023, though they won’t be nearly as impressive a spectacle. The first on May 5 to 6, 2023 is a faint penumbral lunar eclipse visible from southern and eastern Europe, Antarctica, most of Asia, Australia, Africa as well as the Pacific, Indian and Atlantic oceans.

The second will be a slight partial lunar eclipse on Oct. 28 to 29, 2023 visible at least partly from Europe, Asia, Australia, Africa, North America, northern and eastern South America, the Arctic, Antarctica and the Pacific, Atlantic and Indian oceans.

Here are some tips to help you get the most out of the November 8 total lunar eclipse. 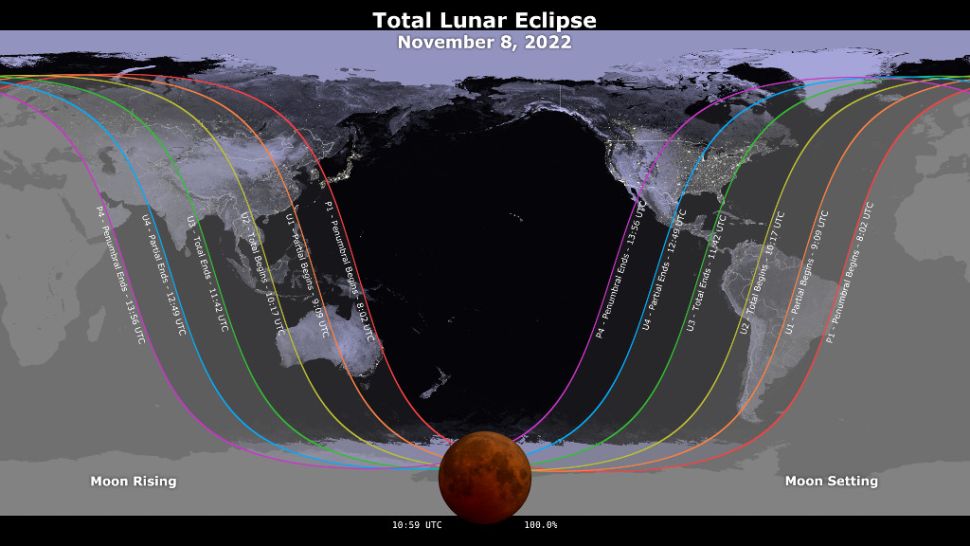 Find out more about the November 8th total lunar eclipse at:
https://www.space.com/blood-moon-lunar-eclipse-november-2022-guide