“For the first time in US history, a total lunar eclipse will take place on election day.”

The sun shall turn into darkness And the moon into blood. Joel 3:4 (The Israel BibleTM) 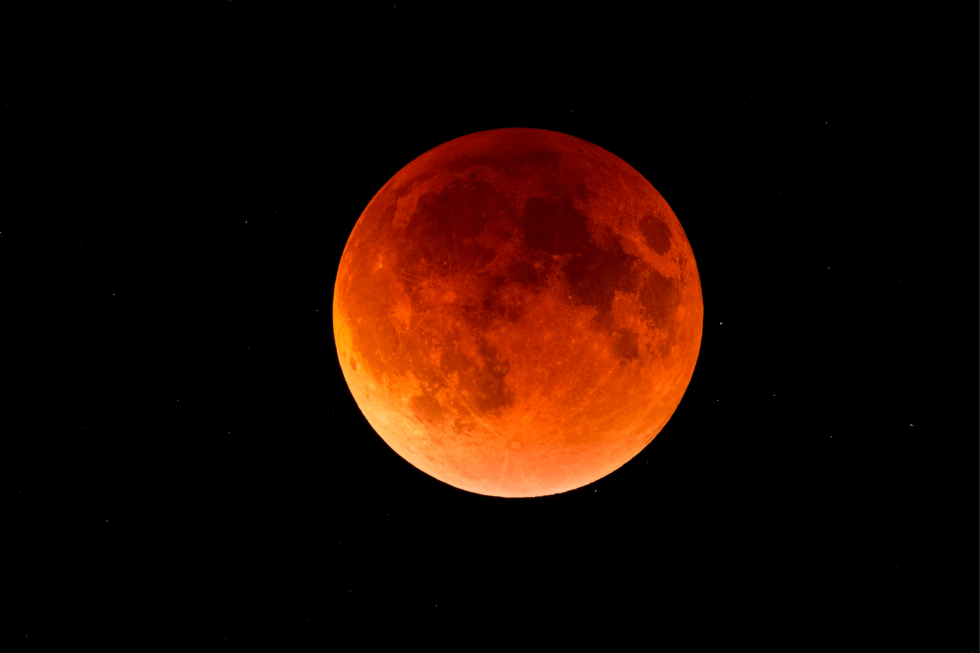 According to constitutional stipulations, elections are held on “the Tuesday next after the first Monday in the month of November” and must fall on even-numbered years. That means election days always fall on November 2, 3, 4, 5, 6, 7, or 8.

There was a lunar eclipse on election day,  Tuesday, November 3, 1846, but it wasn’t total. Instead, it was a rather shallow penumbral lunar eclipse, in which the full moon completely missed the Earth’s inner, dark shadow, and passed through the Earth’s outer, faint penumbral shadow.

A lunar eclipse takes place when the earth is between the sun and the moon, and the moon passes through the earth’s shadow. In this case, the earth’s shadow will block out 97% of the moon’s surface. This eclipse will be a “blood moon”, the result of atmospheric conditions that give the moon a reddish tint rather than black when it moves into the shadow. The red color comes from some of the sunlight passing through Earth’s atmosphere where it gets bent and colors like blue or green are filtered out, leaving behind longer wavelengths like the color red.

“Thus the factors have aligned—both cosmic and constitutional—to manifest a red moon hours before what many predict could be a red wave, they wrote.

This will be the second lunar eclipse this year, the first one taking place on May 16, 2022. There won’t be another total lunar eclipse until March 14, 2025.

This full moon also marks the moon’s arrival at its apogee, the point along the lunar elliptical orbit where it’s furthest from Earth. It will thus appear its smallest, seen from the vantage point of the Earth.

Rabbi Mordechai Genuth discussed the meaning of eclipses in Jewish tradition, explaining that under normal circumstances, lunar eclipses are considered a bad omen for Israel. This is based on a section in the Talmud (Sukkot 29a) that specifies that lunar eclipses are a bad omen for Israel since Israel is spiritually represented by the moon. If the lunar eclipse takes place in the east side of the heavens, then it is a bad omen for all the nations in the east, and similarly, if it occurs in the western hemisphere of the sky, it is a bad sign for all the nations in the west.

“The eclipse will pass over the United States,” Rabbi Genuth said. “The President is connecting his fate with that of the Arabs, choosing them over Israel. He is choosing war, the wars that originate in Ishmael, the wars that are presaged by the upcoming blood moon.”

Rabbi Genuth made one disclaimer; at the end of the section of the Talmud describing the omens contained within eclipses, the Talmud states: “When Israel does the will of the place (God), they have nothing to fear from all of this,” citing the Prophet Jeremiah as a source.

Rabbi Genuth referred to pressure by the Biden administration to open a consulate to the Palestinians in Jerusalem.

“This is also a warning to the incoming Israeli government,” Rabbi Genuth said. “They need to be strong when it comes to Jerusalem.”

He noted that Prime Minister Yair Lapid told Arab media that he would not permit Jewish prayer on the Temple Mount. Rabbi Genuth explained that the name of Jerusalem is rooted in the Hebrew word “Shalem” (complete) which is a reference to the sun which, unlike the moon, does not go through phases.

“Jerusalem is eternal and must remain eternally whole,” Rabbi Genuth said. “The Biden administration is committed to the two-state solution which would establish an Arab capital in Jerusalem.”

The rabbi also noted a prophecy in the Book of Joel that indicates that the coming of the Messiah will be preceded by a blood moon.

Before the great and terrible day of Hashem comes, I will set portents in the sky and on earth: Blood and fire and pillars of smoke; The sun shall turn into darkness And the moon into blood. But everyone who invokes the name of Hashem shall escape; for there shall be a remnant on Mount Tzion and in Yerushalayim, as Hashem promised. Anyone who invokes Hashem will be among the survivors. Joel 3:3-5

“We are indeed close to the end of days so these astronomical signs are taking on increased importance,” Rabbi Genuth said.

Rabbi Yosef Berger, the rabbi of King David’s Tomb in Jerusalem, noted that by hiding the moon, “God is emphasizing the confusion in the world.”

“But hiding the moon shows that the situation is going to get even more confused. The non-Jews have to begin to uphold the Seven Noahide Laws. They are holding elections but the only mandate the government has is through the Bible and the Noahide Laws. This includes the prohibition against sexual perversion. They are also prohibited from spilling blood which now the government is trying to mandate through abortion.”