“This may be the single most important issue brought before the Supreme Court in our lifetime.” — GRB 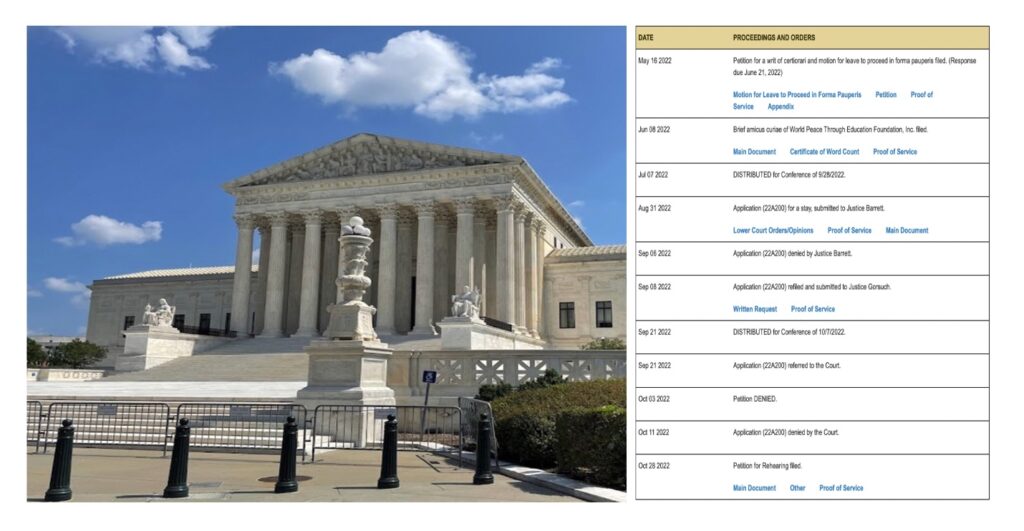 Why is the Fetzer v. Pozner case in the Supreme Court of the U.S. important to you?

[Editor’s note: As it happens, I have filed a Petition for Rehearing on the Court’s Denial of my Petition for a Writ of Certiorari, which is supported by new legal arguments and new factual evidence. Click here to download the Petition for Rehearing. Click here for Appendices A-D (which includes the FEMA Manual for the Sandy Hook Exercise and the CT FEMA Bridgeport Scheduling of that Exercise}. Click here for Appendix E (which is an Affidavit by Texas Licensed Private Investigator, Brian Davidson, of crime scene photos from the CT Stater Police Archive but which not only do not show indications of a mass murder but do not even show classrooms with student desks and chairs}. Ron Avery has an archive of the whole case: http://postwtc.com/frame-pvf.html.]

1.  Do you have a 7th Amendment right to a trial by jury?

Do you have a right to trial by jury in common law matters over $20 in state courts under the 7th Amendment of the United States Constitution? The Supreme Court of the United States ruled in 1916 that you do not.[1] A Federal District Court ruled in 2014 that all citizens of the states and territories are also U.S. citizens under the 14th Amendment and they have 7th Amendment protection to a trial by jury in matters of common law in state courts.[2] The ruling was vacated by a Federal Appeals Court on the grounds that the U.S. Supreme Court has consistently held “that states are not constitutionally required to provide a jury trial in civil case.”[3]

3.  Summary judgments should protect the right to trial by jury:

James H. Fetzer, Ph.D., was deprived of his right to a trial by jury in Wisconsin in a defamation case brought against him by Leonard Pozner using a non-jury trial conducted by the judge under the pretense of a summary judgment. The judge’s grant of a phony summary judgment against Dr. Fetzer was affirmed all the way through the Wisconsin Supreme Court proving that the summary judgment methodology used in Wisconsin does not protect the 7th Amendment rights of the citizens in common law matters in Wisconsin.

4.  Summary judgments cannot find facts, only agreement to them:

Summary judgments are judicial tools to bypass a jury if the parties agree to the facts. The judge can then apply the law to the facts agreed to by the parties. Juries find facts, and if they are agreed to, why call a jury? But the public presumption in all the “Sandy Hook Mass Shooting” defamation and firearm liability cases is that children were shot to death at Sandy Hook Elementary else why find people guilty of defamation for saying the shooting was a hoax? Shockingly, no jury has determined any facts related to the reality of any deaths at Sandy Hook Elementary. No jury has ever been called to hear any evidence supporting or denying that Sandy Hook ever happened.

5.  Can a judge be a jury in a summary judgment proceeding?

Dr. Fetzer compiled a book entitled Nobody Died At Sandy Hook: It was a FEMA Drill to Promote Gun Control containing findings of 13 investigators including six Ph.D.s concluding that Sandy Hook Elementary was permanently closed by 2008, four years before the alleged mass shooting. Dr. Fetzer filed and entered into evidence the entire book at the hearing of the Pozner’s Motion for Summary Judgment against Dr. Fetzer. The judge simply said that all of Dr. Fetzer’s facts and evidence seemed “unreasonable” while Mr. Pozner’s facts and evidence seemed “reasonable and plausible.” This may not be done by a judge in a summary judgment proceeding. He cannot weigh the reasonableness or plausibility of facts and evidence as a jury can and should. The judge can only find agreement to the facts and evidence. If the parties agree to facts and evidence the judge can then apply the law to those facts and grant the motion for summary judgment if the movant provides all elements of their claim or deny the motion if they cannot.

6.  Can you question the validity of mass media narratives?

The effect of the “Sandy Hook Mass Shooting” defamation and deceptive trade practice lawsuits has been to freeze all public questions related to narratives of the mass media cartel. None of these lawsuits called a jury to hear evidence proving the shooting took place. So far, the parties have been found guilty by summary judgment, stipulation, assumption and sanction. The amounts of damage include: $450,000 in the Fetzer case; $73 Million in the Bushmaster case; $4 Million, $965 Million, and $2.75 Trillion in punitive damages requested so far in the Alex Jones cases. This operation by the courts converts unproven narratives into adjudicated reality regardless of proof to the contrary never seen by a jury. The mass media cartel becomes the unquestionable Ministry of Truth.

7.  What are the correct summary judgment procedures?

Dr. Fetzer does not challenge the judicial concept of summary judgment per se but rather shows the court that not all summary judgment procedures protect the 7th Amendment rights or state rights to a trial by jury. Dr. Fetzer invoked the jurisdiction of the Supreme Court of the United States by showing that two states differ on what the correct procedures are for summary judgment in order to protect the rights of the nonmovant (Defendant). He compared the Texas method with the Wisconsin method revealing the flaws in the latter.

8. What are the correct procedures for a summary judgment?

8.1. The burden must be on the movant to show there are no genuine material fact issues in dispute;

8.2. The judge must take all the nonmovant’s facts supported by evidence as true;

8.3. The judge must indulge all reasonable inferences that can be drawn from the nonmovant’s facts supported by evidence;

8.4. The judge must resolve all questions in favor of the nonmovant.

8.5. If the movant does not agree with the nonmovant’s facts supported by evidence the judge must deny the motion for summary judgment without going any further.

8.6. If the movant agrees with the nonmovant’s facts supported by evidence and can show all elements of their claim, the judge may grant the summary judgment while having protected the right of trial by jury of the nonmovant.

9.1. The burden is on the nonmovant to prove there are genuine material fact issues in dispute to win their right to a trial by jury which they already have and which should be preserved by the judge;

9.2. The judge must verify that the movant has stated a claim;

9.3. The judge must determine if there are any material fact disputes;

9.4. If there is a material fact dispute, the judge verifies that the movant has made a prima facie case with their proof;

9.5. If the movant has established a prima facie case, the judge looks at the nonmovant’s facts and evidence to determine if there are any fact disputes or inferences from undisputed material facts;

The Wisconsin summary judgment allows the judge to weigh facts and evidence of both parties rather than being limited to finding agreement only after accepting the nonmovant’s facts supported by evidence as true etc., etc. This procedure is simply a non-jury bench trial conducted under the pretense of a summary judgment.

10.  Uniform rules of summary judgment must protect 7th Amendment in every state court:

Dr. Fetzer’s case is the most important before the U.S. Supreme Court at this time because it reveals that any member of a minority group can be found guilty without a trial by jury in a summary judgment proceeding in Wisconsin or in any other state or federal court with a similar summary judgment methodology.

If you believe that the right to trial by jury should be protected in every state court dealing with common law matters over 20 dollars, then you need to be interested in Fetzer v. Pozner Writ of Certiorari before the U.S. Supreme Court. But if you believe individuals and companies should be found guilty without juries and then destroyed by absurd damage awards found by juries that have no evidence of a crime or tort, then you should go back to sleep.

Donate to the cause: https://www.givesendgo.com/fundingfetzer