SOTN Editor’s Note: There are many types of evidence that can serve as categorical proof of a crime or crime spree.  There are at least 17 types of evidence which can be used in a legal context to both indict and convict a criminal or crime syndicate as the Democrat Party has become.  As follows:

Different categories of crimes are more easily proved with the various types evidence.  For example, election theft is extremely easy to prove with statistical evidence.  As long as the underlying statistics are accurate, the numbers don’t lie.

Which brings us to the 2020 POTUS election.

The following rigorous statistical analysis proves beyond a shadow of a doubt that POTUS Imposter Joe Biden and the Democrat Party perpetrated a highly organized criminal conspiracy to steal the 2020 POTUS election.

That the official and documented election outcomes from 1988 through 2016 in 22 “Bellwether Counties”, all went contrary to the well established historical pattern of voting, serves as ironclad and irrefutable evidence that the 2020 election was stealthily and successfully stolen.

The Fall of the Bellwether Counties

📃This article is part of a series on Identifying Electoral Fraud Using Trend Analysis.

There are 22 counties in the US that managed to vote for the winning party in every single election from 1988 to 2016. Their finger was so tightly on the pulse of America that they not only picked the winner each time, but managed to accurately flip parties four times in that period. These are the “bellwether” counties.

How did the others all get it so wrong?

Bellwether counties are important, and their significance should not be downplayed. They have a rare and unique property of having a perfect demographic mix that allows them to vote for either party based on the merits of each election, and always get it right.

(Think about what it takes, and what is required for a county to always get the election right. Don’t simply gloss over this. Take the time to ponder and realize that this is no mean feat! It requires a lot more than “pure luck”.)

It far surpasses any “statistical” explanation, because at the end of the day we are dealing with real people, with real personalities, concerns and aspirations, which happen to align perfectly with the whole American population.

Please keep this in mind as you continue to read through our bellwether analysis. (Needless to say that if the tables were reversed, we would hear no end of the significance of bellwether counties in the media.)

What does it take for a county to be a bellwether?

For a county to be considered a bellwether it would have to vote for the winning party at each of the following elections:

That is 4 switches in 8 election cycles! Out of 3,141 counties, there were 22 counties that had successfully voted for the winning candidate in each and every election between 1988 and 2016 (included).

If bellwethers were just a “statistical curiosity” and purely random, we could expect half of these counties to pick the winning party at the 2020 election.

But there was only one county – Clallam, Washington – which voted Democrat. All other 21 counties voted Republican.

It is easy to gloss over this. We already claimed that bellwether counties are a lot more than “statistical curiosities”, but let’s assume for the time being that normal rules of probability apply…

The probability is hard to comprehend, so let’s figure it out for real. Let’s find a coin, and flip it.

Or even better, if you have children, get them to do it for you. It will keep them entertained for hours, and you can tell them it is for a good cause. 😉 After you have spent an hour trying, record the maximum streak length you achieved.

You should now have a real tangible sense of how difficult it is to get a streak of 10. Now imagine getting 21 out of 22…!

Furthermore, consider the fact that bellwethers don’t just have a random 50% chance at winning — we should expect them to have a better than 50% chance of getting it right.

For the mathematically-minded: the table below shows that county outcomes do loosely follow a random outcome, up until a point. After 8 elections, the number of counties left standing defy the odds, and it is this fact that makes them “bellwether” counties.

The table shows the number of counties that voted for the winning candidate since the 1988 election. Keep in mind that if we started the attrition from the 1980 election, there would still be 19 counties standing after the 2016 election. That is 19 counties still standing after 10 elections! (From a purely random statistics perspective, there should only be 1 or 2 standing. The fact that there were 19 demonstrates the incredible predictive abilities of these counties.)

Somehow we jumped from 22 to 1 county in one election cycle and we are supposed to believe that is “normal”?

The odds of 21 counties out of 22 missing the mark is extremely remote!

Here are the concepts we have established so far:

This is just the beginning. It gets a lot more interesting…

Are some bellwethers better than others?

Well, let’s consider the percentage gap between the winning and losing party in these counties. In other words, how strongly do they swing to the winning party?

There are only 4 counties.

Re-doing the analysis we obtain 35 modern bellwether counties after the 2016 election. Of these 35 counties, 10 of them consistently voted over 50% for the winning candidate since the year 2000. They are:

Notice RANSOM, SARGENT, and MARSHALL in particular. Outstanding. Their ability and sensitivity to dramatically switch parties in 2000, 2008 and 2016, is outstanding. It clearly shows they hold no allegiances and will vote for whichever party makes the most sense to them at each election. They simply vote on merit.

Since only Clallam County voted Democrat in 2020, we know they all voted for the Republican party in 2020 and got it wrong. The question is, how much did they get it wrong by?

Did they narrowly miss out on voting for the Democrat party in 2020?

You can find the answers to the above questions yourself by searching this site: politico.com/2020-election/results
(Go to the bottom of the page. Click on the relevant state then look for the county name.)

Once you have found all the results and looked at the trends, remember, these counties are the best counties at predicting an election outcome!

Which counties are the best at “swinging”?

In this section we will introduce a new concept: The “swing” county.

To make things more interesting we will only look at “swing” counties since the 2004 election. (i.e. We will only focus on the most recent elections to increase the pool of counties to analyze.)

So, for our purposes, a “swing” county would have voted as follows:

Here are the top 50 counties by Democrat voting percentage in 2008:

How many of these counties swung back to the Democrat party in 2020?

You can find the answer by searching politico.com/2020-election/results

We’re not going to just give you the answer, since the significance of the result might be lost on you. Go on, look them up! Bonus points if you also keep track of the trends from 2016 to 2020.

Here is a quick recap of what we have established so far:

What about counties that are great at “switching”?

We will now introduce another new concept, called a “switch” county. A “switch” county is our name for a county that happens to vote for the winning party whenever there is a change of parties, ignoring how they voted for the incumbent.

💡TIP: You have probably noticed by now that with each new section we write, we are “relaxing” the constraints to make it easier to build a case for the Democrats winning the 2020 election.

Concretely, a “switch” county would have voted for the following parties:

There are 150 such counties.

It is important to realise these counties have no allegiances whatsoever and will happily vote for whichever party makes the most sense to them based on merit. 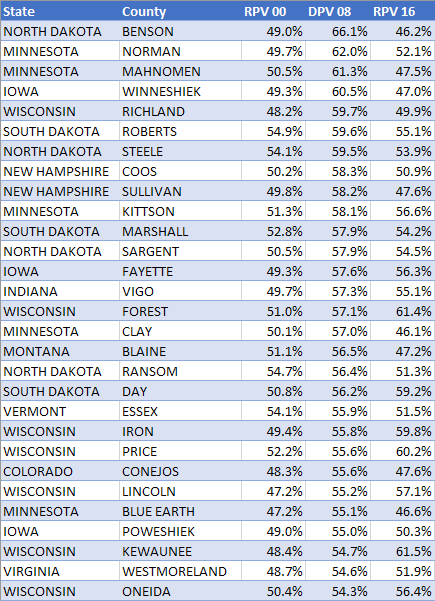 Here’s what you need to look into:

Let’s quickly recap what we have established so far:

In this post we will further relax the constraint by analyzing counties that voted Democrat in 2008 and Republican in 2016 only; that is, the “switch” counties in the most recent elections. 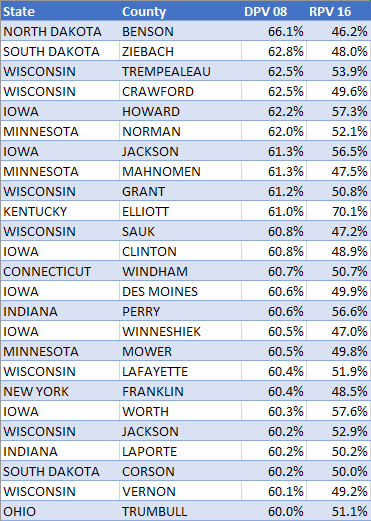 Again, you’ll appreciate the results when you dig some of them up yourself. Find the answer by searching politico.com/2020-election/results.

There are 80 “swing” counties.

There are 391 recent “switch” counties.

With such overwhelming Democrat support in 2008, one can only surmise that ALL these 25 counties would have switched back to the Democrat party in 2020. Especially since Biden received million more votes than Obama did in 2008.

SOTN Editor’s Note: Now here’s another take on the very same type and cogency of statistical evidence.  Only this time the statistical analysis concerns 17 bellwether counties throughout the USA.  See the graph below which clearly indicates that something went very wrong during the 2020 POTUS election. 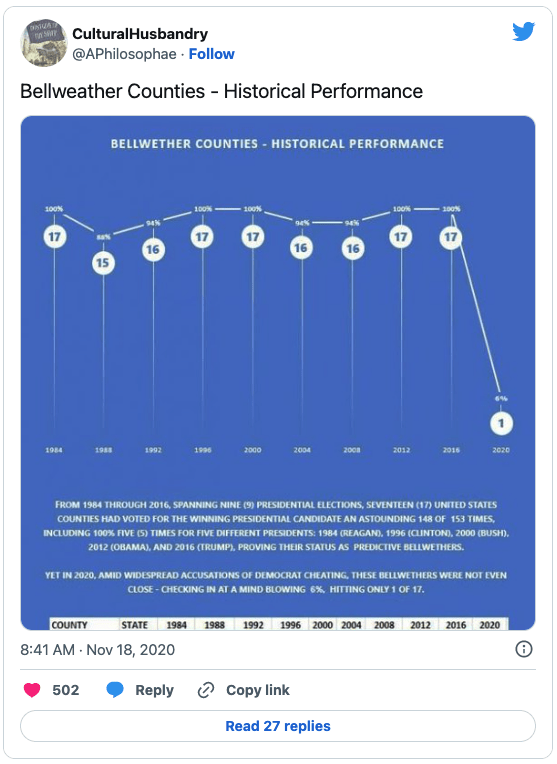