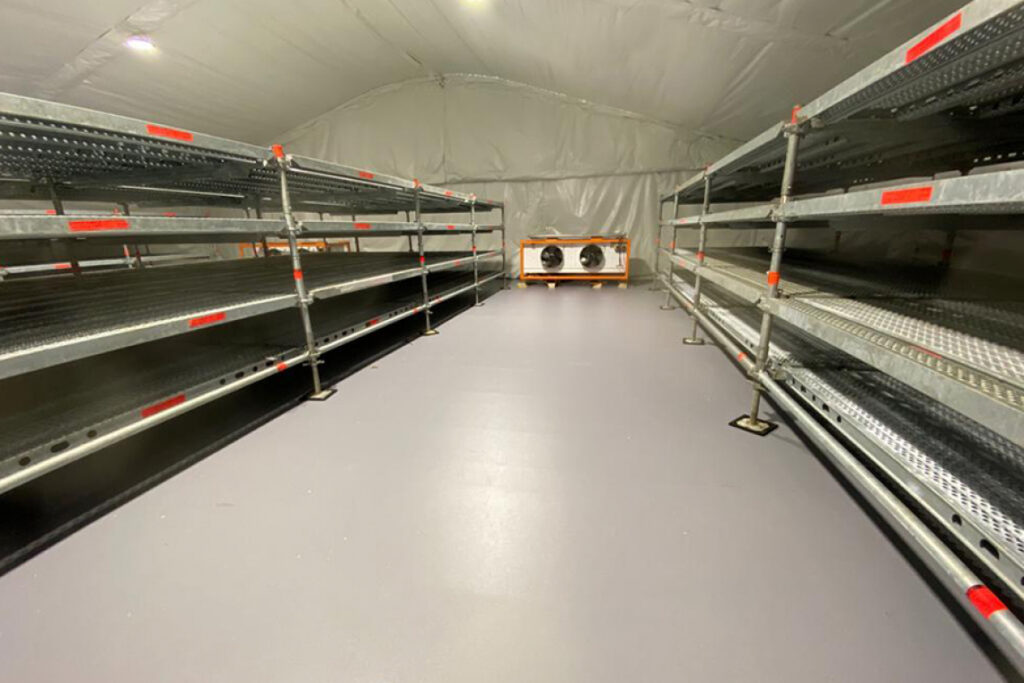 Dead bodies are being stored in makeshift morgues to deal with a backlog of deaths over the winter months as the United Kingdom National Health Service (NHS) struggles to cope and hospitals reach full capacity. Temporary mortuary sites are being opened up across the UK in a bid to deal with increased demand following a deadly Christmas/New Year holiday period.

Some sites that were erected to compensate for the number of Covid-19 deaths during the pandemic are now reopening their doors again. Others installed include one at a council gritting yard in Salisbury, Wiltshire, and another at a former landfill site near a nature reserve in Wollaston, Northamptonshire.

It is estimated around 4,000 more Brits died than normal towards the end of the year – with a combination of flu, Covid and hospital and ambulance delays all blamed. As a result, the refrigerated units – some which resemble shipping containers – are being used to cope with the current winter death rates.

In Northamptonshire, Wollaston Mortuary, which was used during the pandemic, has been ‘reactivated’ as part of the county’s ‘death management activation plan’. Named The Leys, it consists of two large cold rooms with mortuary-level racking, an office, and a covered reception area for discreet transport to and from the site.

It was used to support both the Northampton and Kettering General Hospitals with mortuary capacity during the height of Covid and has since been reopened due to seasonal demand. The mortuary, which is monitored 24 hours a day, is owned and managed by both West and North Northamptonshire Councils.

The Wollaston Mortuary site manager, who wished to remain anonymous, said the site reopened this winter to cope with deaths over the festive period.

He said: “We reopened our doors to cope with the festive period, over the last two or three years we have done so. The mortuary here can hold up to 200 bodies and we will stay open as long as we are required to do so, which will probably be about another six weeks. In this time, we will stay in contact with the two hospitals so we know what is going on and how long we will be needed to stay open for.”

“During the previous two winters, The Leys facility in Wollaston has opened to support both Northampton and Kettering General Hospitals with mortuary capacity during the height of the Coronavirus pandemic. Winter is a time when respiratory illnesses increase, and this year it has been predicted that there will be a higher number of illnesses circulating.

“As such, The Leys reopened last week to support the county’s health system. This enables the management of capacity and care for the deceased within the North and West Northamptonshire areas with compassion and respect. We would like to thank Wollaston residents in particular for the way in which they responded to the site opening in previous years and their ongoing support.”

Death rates are naturally higher during the winter, with added pressures from flu as well as Covid. The Leys originally opened in April 2020 on a site that housed a former tip owned by former Northamptonshire County Council.

Since the opening, the site has been activated several times for eight-week periods and the facility has also been used by neighbouring Bedfordshire and Milton Keynes. Currently, Northampton General Hospital mortuary has space for 146 bodies and Kettering General Hospital has room for 103 after additional racking was installed to increase capacity.

The Leys temporary body store will increase the county’s capacity by nearly 200 as it reopens with 184 refrigerated spaces and 12 frozen plots. Temporary morgue units are typically fitted in a 40ft shipping container and can hold up to 35 bodies each.

The mortuary refrigeration unit has been installed at the back of a grit depot to store the dead bodies in and it is currently under 24-hour surveillance. The hospital has confirmed the additional site will remain open as long as it is needed.

A spokesperson from Salisbury District Hospital said: “We can confirm that we have opened additional mortuary capacity to accommodate an increase in need across the local community. Our mortuary service operates to the national standards treating the deceased and loved ones with dignity and respect at all times regardless of location. All our additional capacity provides privacy and has 24/7 security.”

A spokesperson for Liverpool University Hospitals NHS Foundation Trust said: “It is common practice for mortuaries to have purpose-built temporary systems available. This ensures that patients continue to be treated with dignity and respect, in facilities which are equivalent to a permanent mortuary, during periods of increased demand. Two of these systems, which meet standards set out by the Human Tissue Authority, have been deployed at the Royal Liverpool University Hospital.”

What “officials” are saying, however, does NOT match what the general public is thinking.   Far and away, the general public is of the opinion that people are dying BECAUSE OF THE COVID-19 VACCINES!    As the mRNA within those so-called “vaccines” continues to grow and operate inside the people who took the jab, those people are dropping dead.  The public is quietly judging that the vaccines are what is causing so many deaths.