Diego Armando Maradona was — BY
FAR — the most famous advocate
in the world for the Palestinians in
2020 as he has been ever since Lady Diana, Princess of Wales, was assassinated in a Paris hospital on August 31, 1997. 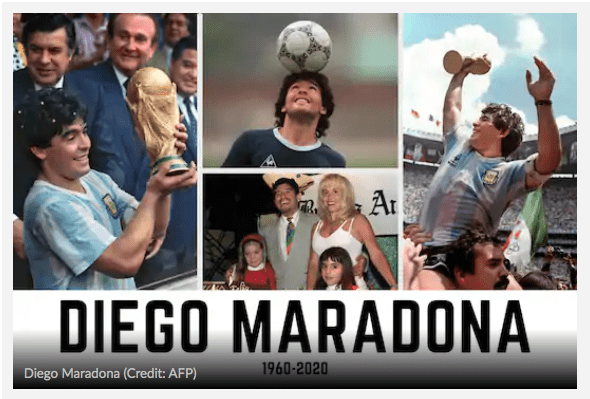 We write this exposé with a heavy heart.

The sudden passing of Diego Armando Maradona has shocked Argentina.

His startling death has completely stunned the football/soccer world as no other in the history of the sport.

There are very good reasons for this.

Diego Maradona was perhaps the most famous athlete on the planet today.

In order to appreciate the high esteem in which he was held worldwide, just read any of the articles on the internet that rate the “Top 10” or “Top 20” or “Top 100” soccer players of all time.

Maradona is almost always first on the list.  Yes, Pele is sometimes first, but soccer players know that Maradona was the “God of Football”.  They even gave him the extraordinary moniker —  D10S — to portray his virtual divinity on the soccer field.*  (His jersey showed the number 10 throughout his entire illustrious career.) 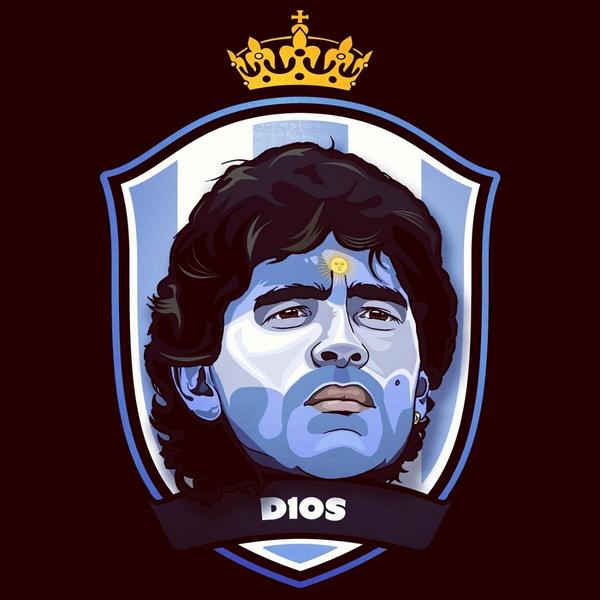 If one were to compare Maradona to the greatest athletes of all time, he would rank right up there with Muhammad Ali, Michael Jordan, Pele, Tiger Woods, Tom Brady, Wayne Gretzky, Michael Phelps and other sport stars.  However, his sheer domination of the sport of football was even greater that any of those stellar athletes, which therefore sets him apart from even the greatest GOATS.

Jus how awesome was Maradona on the pitch?  Take a look here:

Diego Armando Maradona: Watch the GOAT perform his magic
on the pitch (Video)

Because Maradona was truly considered a D10S in the world of football he was listened to by the masses of soccer-loving enthusiasts.  He had perhaps the largest [LOYAL] audience in any sport on Earth.  Yes, he was that respected and loved for his godlike mastery of the game and unparalleled prowess on the pitch.  He was also a really nice guy, not a typical fake sports star.

It’s crucial to understand that Maradona was considered the ultimate and quintessential underdog because of his humble roots in a shantytown of Buenos Aires, as well as his unrelenting advocacy for the oppressed indigenous peoples around the globe.

Of all the persecuted and powerless people, Maradona’s heart was closest to the Palestinians.  He took on the seemingly hopeless Palestinian cause early on in his advocacy work because he so identified with them.  They were his people as much as his poor and destitute fellow Argentinians were.

This particular data point is of paramount importance to comprehend if one is to unravel the complex conspiratorial plot to stealthily murder him via medical assassination.

Medical Assassination is the Easiest

The sequence of events leading up to the unanticipated death of Diego Maradona tell a story that is at once highly suspicious, quite telling about the method of murder and full of clues regarding who ordered the hit.

Incidentally, this analysis is by no means a conspiracy theory; rather, it’s the product of very serious allegations made by Diego Maradona’s own attorney—Matias Morla.  See: Diego Maradona’s lawyer calls for investigation into ‘criminal idiocy’ of emergency services after his death

Clearly, there is something very, VERY, wrong with this picture.

Really, how does the most famous person in Argentina, in South America, and in the worldwide realm of football not receive basic medical care in such dire circumstances?!?!?!

Such an obvious lapse in providing necessary treatment and fundamental care could only have happened on purpose.

But, who pray tell, could have possibly carried out such a complex criminal murder plot?

The very same international assassins who controlled the hospital that Princess Diana was killed in, that’s who!

The very same murderous tribe who killed Kennedy and who completely controlled the hospital he was murdered in, that’s who! 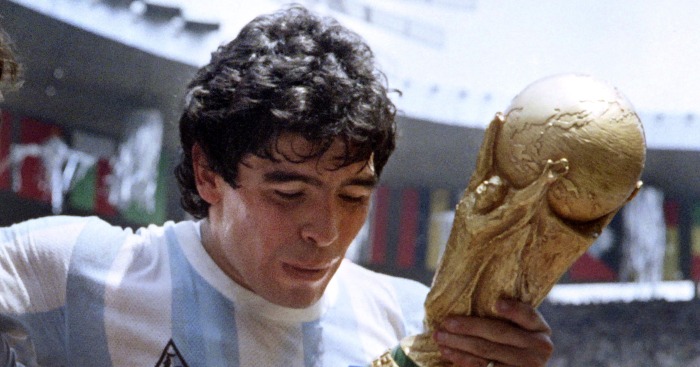 The ongoing CORONAhoax has created a global environment whereby anyone on the planet can be easily killed by their unseen enemies.  In truth so many are dropping like flies because of overwhelming fear and also by intentional execution via medicide (i.e. Murder by physician or hospital staff).  New York State alone has been the site of a truly horrific crime wave of geriatric genocide that’s been abetted by Governor “Killer” Cuomo and his homicidal co-conspirator Mayor “Kill Bill” de Blasio.

In point of fact, there are many enemies of Zionism who are being picked off like ducks on a pond in 2020.  Each of these covert assassinations has been carried out with great ease and not the slightest suspicion, especially because of all the utterly fake hype surrounding the indisputably bogus COVID-19 mortality rate.  Everyone who dies, dies of the cornonavirus this year and next—RIGHT?!

Then there is the remarkably brazen assassination by Israel of Mohsen Fakhrizadeh, the alleged head of Iran’s nuclear weapons program.  That heinous murder was carried out just two days after the medical assassination of Diego Maradona.

It appears that the slaying of the eminent nuclear scientist was conducted as a distraction to the Maradona hit in view of the HUGE stink put up by Diego’s attorney and physician in the international media ON NOVEMBER 27, 2020, the very day that Fakhrizadeh was dramatically ambushed by way of a car bombing and several gunmen at the crime scene. See: SOCCER STAR’S DEATH ‘CRIMINAL IDIOCY’ … Lawyer Demands Investigation

KEY POINT: Both of these murders were also deliberately committed during the Thanksgiving holiday in the United States which, quite conveniently for the assassins, takes many an investigative journalist off the case—BOTH CASES—but especially Maradona’s.

There is nothing more dangerous to the cause of International Zionism than a powerful and loud champion for the people of Palestine—NOTHING!

Diego Armando Maradona was just such a highly influential champion for the Palestinian cause.  There is not even a close second to the courageous advocacy that he undertook knowing full well it was as dangerous as anything a man could ever do on Earth.

It’s of paramount importance to know that Maradona’s stratospheric status in Argentina was attained when he scored his 2 goals against Great Britain during the 1986 FIFA World Cup at the Azteca Stadium in Mexico City.  Each of those goals has received unprecedented attention by football fans the world over, one being called the “Goal of the Century” and the other being labelled the ‘Hand of God’ Goal.

That Maradona was singlehandedly responsible for the most ignominious football defeat in UK history — AFTER ARGENTINA LOST THE FALKLAND WAR — has been a HUGE thorn in London’s side ever since.

Carrying around such an albatross has been far too much for the British Zionists to bear.  Hence, it’s quite likely that the outright medical assassination was a joint conspiracy carried out by both Israeli and British Zionists.  Who else, in the entire planetary civilization, would have held such a multi-decade grudge against the extremely charismatic Diego Maradona?! 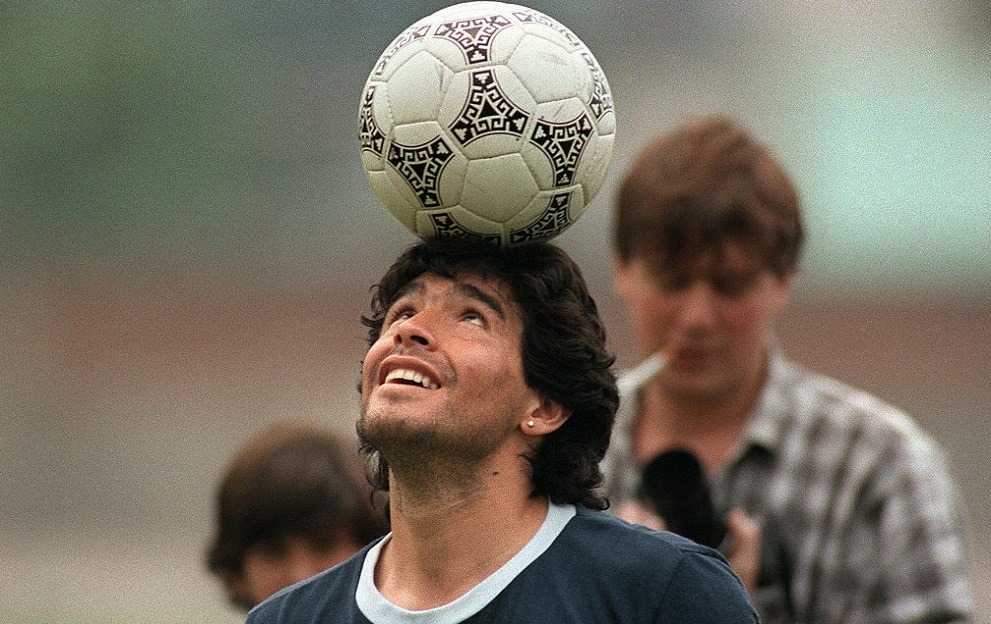 Revisionist Historians for World Peace
State of the Nation
November 29, 2020