Do you really think China did it? Really, they started this pandemic at the Wuhan Lab?

The Armchair Covid Sleuth
State of the Nation

Perhaps the stupidest thing on the Internet today is that “China did it!”

Really, China deliberately released SARS-CoV-2 (it doesn’t even exist) from their Wuhan lab to start a worldwide pandemic?!?!

Why, to guarantee a Trump loss (even though he really won the 2020 POTUS election).

So, we’re expected to believe that China would trigger the worst pandemic (It’s really a hoax) since the Spanish Flu Pandemic of 1918 to do what?

To be blamed for the most destructive (not deadly or disease-causing) pandemic in world history?

How stupid is that!  Utterly STUPID!!!

And, “NO!”, the Chinese are not that stupid.

Why would the Chinese Communist Party ever sanction such an absurd bioterrorist operation carried out the world over; and then be vilified for eternity for such a reckless and heinous crime against humanity?!?!?!

From all the available evidence, it’s quite clear that OPERATION COVID-19, is a fundamentally Zio-Anglo-American bioterrorist black operation and global psyop conducted primarily, but not exclusively, by Operation Gladio—the notorious terrorist arm of NATO (sometimes known as the North Atlantic Terrorist Organization).

As for that little data point which points directly to a joint NATO-UK-US-Israel conspiracy to trigger a fake global pandemic as a means to implement the New World Order agenda via the GREAT RESET and COVID-1984 execution plan, the following link exposes that inconvenient truth and much more.

No matter how anyone looks at this unparalleled society-collapsing event which continues to this very day, the Western powers have their fingerprints all over THE GREAT SCAMDEMIC.

Yes, China was used by Fauci, Gates and other frontmen for this Plandemic to conduct highly dangerous “gain of function” research and coronavirus experimentation, but that was only to set them up as the scapegoat.  It made the Wuhan wet market narrative more believable, even though such a jump from species-to-species might take 400 years, if then.

And, yes, the entire city of Wuhan was used to transparently orchestrate this CORONAhoax in a highly dramatic way; but that was because the boys in Beijing direly needed a cover story for the military deployment of 5G throughout that greater metro area.  (Wuhan was selected as the premier 5G Demonstration Zone which saw 10,000 base stations activated during 2019.)  After all, when so many obvious cases of 5G Syndrome and 5G Flu broke out all over Wuhan, the CCP needed a serious cover story to give to the Chinese people as well as to the world-at-large.

KEY POINT: It was actually Tel Aviv conspiratorially working behind the scenes with Beijing that used the Wuhanese in an extremely risky 5G experiment throughout 2019.  Netanyahu and Jinping have made secret agreements where it concerns the roll-out of 5G worldwide via global ICT companies like Huawei.  Once that highly lucrative deal was agreed to by China (and blessed by the London banksters), they were vulnerable to being coerced into choreographing the unprecedented public health disaster in Wuhan, which was staged with Hollywood-level sensationalism so as to con the entire planetary civilization that a pandemic was in the making.

What else needs to be said?  The Zio-Anglo-American perps planned on blaming China all along … … … and because of China’s own need for a major distraction, they fell right into the trap.

SOTN Editor’s Note: Of course, it’s true there is no such thing as SARS-CoV-2, but that doesn’t mean there’s not a COVID-19 bioweapon.  The original release of that military-grade bioweapon occurred during the 2019 Military World Games held in Wuhan, China during October.  Why else did the U.S. Military place 35th in that international competition (see “Medal table” below) except that those American service members were not really athletes, they were operating as agents of Operation Gladio setting up the future pandemic stage throughout Wuhan with a highly sophisticated Covid bioweapon that was deliberately bioengineered to elude even the best medical investigators and scientific researchers.  And so it has to this day. 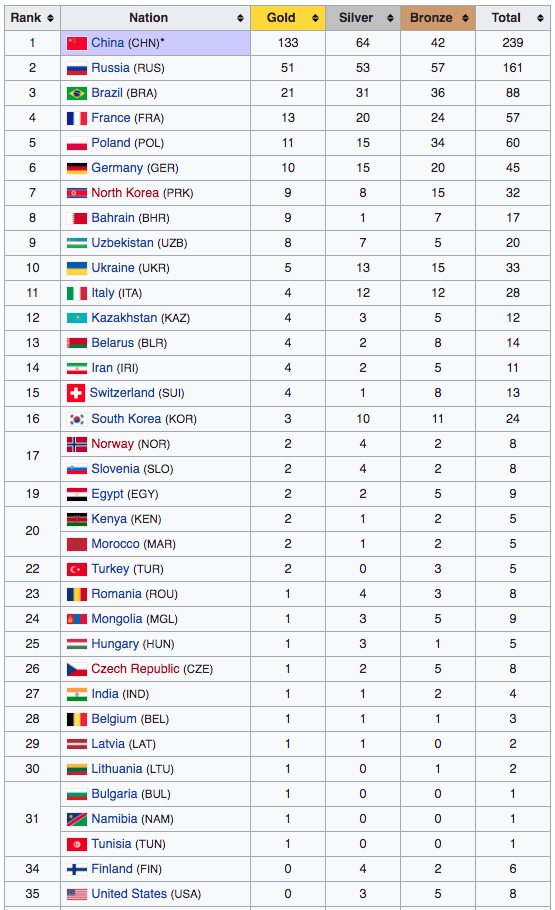